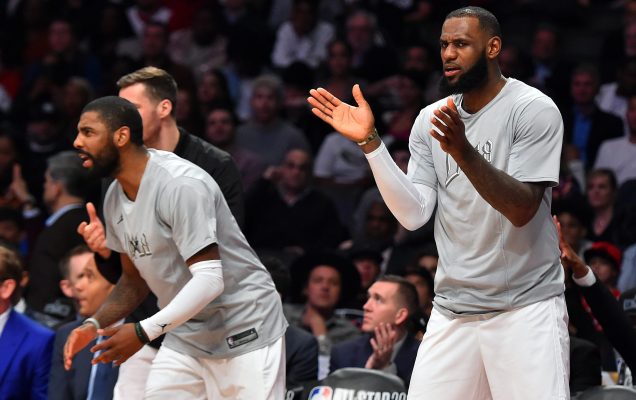 Critics around the NBA have begun to talk about the Los Angeles Lakers’ inability to attract a second star to play with LeBron James, and former teammate and Cleveland Cavaliers All-Star Kyrie Irving has offered some insight into why.

In a recent interview with ESPN, Irving went into detail regarding the challenges of playing with the four-time MVP.

“t’s definitely a challenge,” Irving told ESPN when asked about playing with James. “You now become part of a championship-caliber team based on a unique talent. LeBron is so smart, so talented, such a strong leader. And you’re trying to implement who you are, and grow as a player and learn every single day. And it can be difficult because it demands a lot of you.

“Certain times young players — and even older ones — find it a big transition, because you’re playing a certain way, and growing as a player, and you have a vision of what your career will look like. And then this player of such great stature arrives, and you’re still trying to be great, and he’s already great. And you find yourself asking, ‘OK, what are the steps to get there?’ So now do you learn by example from watching him? Do you learn by the way he treats his body? By the way he treats his business off the court? By his philanthropic path? So you just watch and you observe.”

Irving and James enjoyed great success playing alongside one another. They advanced to three straight NBA Finals, and of course brought the 2016 NBA championship to Cleveland.

Nonetheless, it seems quite clear that Irving regularly felt the negative aspects of playing with a player who was not only the face of his team, but the face of the entire league.

“You also have to be aware of the expectations from the outside and how that can infiltrate your thinking,” Irving said. “Somehow it ends up where everybody wants to play the blame game when things don’t go right. So it’s just a lot to get used to. It comes with a lot of pressures. I believe the very, very special ones, the unique ones, gladly take on that challenge, and they relish it. You can’t be afraid to challenge another great person. That’s how greatness is achieved.

“It was a lot for me to figure out. The belief I have in myself goes way beyond anything that could deter me from what I want to accomplish. You can never ever, ever, ever, ever lose your sense of self while you are playing alongside a great player.”

Now, Irving is the face of his own team with the Boston Celtics. Considering their loaded roster, it would not be much of a shock to see him and the Celtics advance to the NBA Finals this season. If James wants to meet him there, the Lakers will most likely have to convince a star that they will be able to overcome the many challenges of playing with the three-time NBA champ.