Video: Collin Sexton Gets Punished for Not Bringing Enough Donuts for Cavs 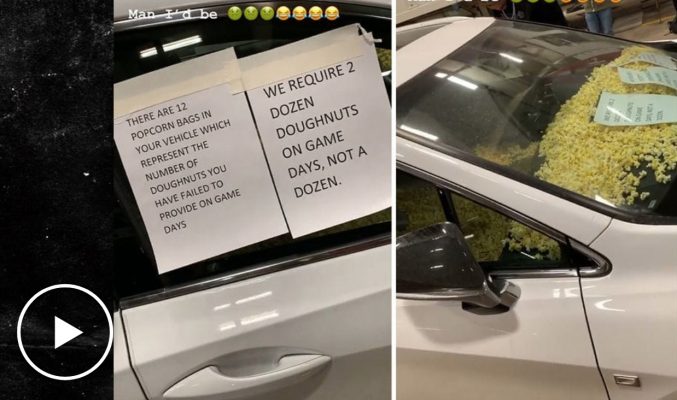 One of Cleveland Cavaliers point guard Collin Sexton’s menial roles as a first-year player is to pick up donuts for his veteran teammates. An error on his part led those teammates exacting retribution that was captured by Tristan Thompson and then put on social media.

The popcorn left in Sexton’s car was accompanied by two notes that explained his mistake of not bringing enough donuts. Thompson, who’s currently rehabilitating a sprained foot, captured an image of the inside of the rookie’s vehicle while also providing commentary.

The paying of such dues by rookies is something that can be seen in all sports and serve as an amusing way of helping the newcomer bond with the team. Considering the current state of the 7-23 Cavaliers, lightening the mood of what’s become a season of misery was a welcome distraction.

Despite the fact that Sexton is just 19 years old and in his first season in the NBA, he continues to show the promise that led the Cavaliers to select him out of the University of Alabama with the eighth overall pick in the draft.

Sexton has played in all 30 games for the Cavaliers this season, starting in 20 contests. He’s averaging 15.3 points, 3.0 rebounds and 2.5 assists. Prior to the Cavaliers’ trading of point guard George Hill to Milwaukee, Sexton had been tapping into the veteran’s knowledge of the game.