Alec Burks Says He’s Hoping to Stay in Cleveland, But Is Uncertain About Future 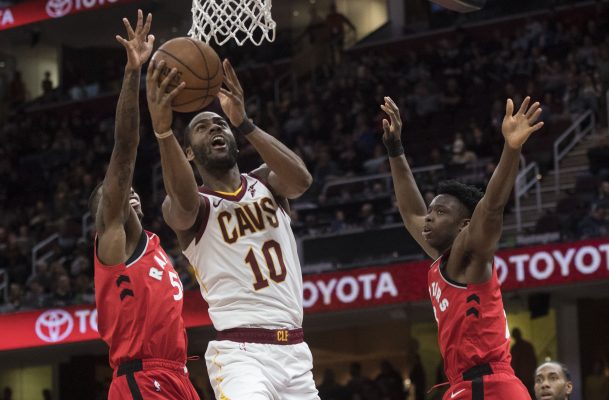 Being the subject of trade rumors almost immediately after being acquired by the Cleveland Cavaliers is a fact of life for the team’s newest member, guard Alec Burks. Despite his uncertain status, Burks is hoping to stay in Cleveland, but realizes the ultimate decision is out of his hands.

After the Cavaliers’ 99-97 road win in Brooklyn on Monday night, Burks was asked about the odd situation and offered this response:

“Hopefully. That’s not up to me. We will see what happens.”

The reason that Burks might be dealt again before the February trade deadline is due to the fact that he will be a free agent next July. For the Cavaliers, the 27-year-old veteran’s value is debatable, given the Cavaliers’ rebuilding status.

Burks is making $11.5 million this season and may hold value to a team looking to add depth for the postseason. In addition, a team that’s looking to shed salary in preparation for the start of the 2019 free-agency period may put in an offer for his services.

One player familiar with Burks is teammate Rodney Hood, who played with him in Utah before Hood was traded to the Cavs last February. Hood believes that Burks has the makeup to deal with his uncertain future:

“It’s tough. But he’s a mature dude. This is his eighth year. We start to learn about the business as we go along. As long as you have a job in the league, it’s great. I’m sure he’s fine and at peace with it. The future will take care of itself. I think Alec can flourish here.”

Burks made his own statement about staying with the Cavaliers by helping them hold off a furious comeback bid by the Nets with a game-winning dunk on Monday night. Cavs head coach Larry Drew offered a reason why the newcomer was used in such a crucial situation:

“That’s his game. He attacks the basket,” Drew said. “Because he’s so athletic, he can maneuver to the basket and get a shot off. The one thing I was trying to do, I wanted to be aggressive on the last play of the game. If the same shot hadn’t gone in, just wanted to take them to overtime. We were going to get the last shot. He just made a really good move with the basketball.”

Making more good moves of that nature could possibly aid in his chance to stay with the Cavaliers. His next opportunity comes on Wednesday night, when the defending NBA champion Golden State Warriors come to Quicken Loans Arena.