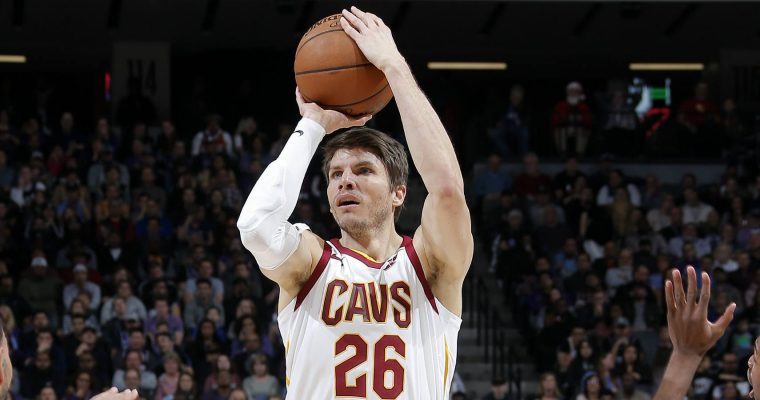 Cleveland Cavaliers shooting guard Kyle Korver is on the trading block, and according to a recent report, four teams have voiced their interest in the veteran sharpshooter thus far.

Gery Woelfel of WoelfelsPressBox.com reported that along with the Milwaukee Bucks, there are three other teams in the NBA who are looking to acquire Korver.

“The Bucks aren’t the only team interested in Korver’s services,” he wrote. “Sources said Philadelphia, Oklahoma City and Los Angeles Lakers are also among the Korver suitors.”

Woelfel also divulged what the Cavs are looking to gain in a deal involving Korver:

“According to sources, the Cavs are seeking a first-round pick for Korver, although the prevailing feeling among several NBA officials is that no team will likely agree to the Cavs’ asking price.”

Unsurprisingly, the four teams interested in Korver are all in varying degrees of win-now mode. While the Bucks are currently playing like one of the best teams in the NBA thanks to superstar Giannis Antetokounmpo, the 76ers are looking to add shooters around newly acquired star Jimmy Butler.

As for the Thunder, four straight losses to open the 2018-19 season have been followed by nine wins in their last 10 contests. Finally, it is no surprise that LeBron James and the Lakers are interested in Korver after the two vets spent the last two seasons playing side by side.

Currently, Korver is averaging just 5.5 points per game, his lowest season average since his rookie year. However, much of that is due to the fact that he has seen reduced minutes this season, and when given the opportunity, he has proven that he can still be a difference maker on the offensive end.

By this point, it is clear that the Cavs are not in win-now mode. Whether or not they can get what they want in return for Korver from a team remains to be seen.