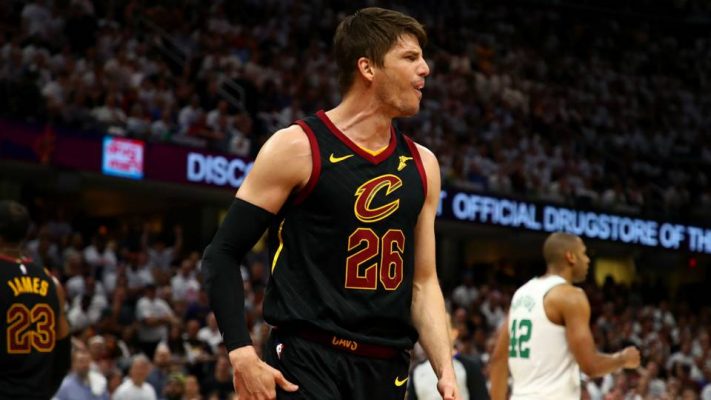 Cleveland Cavaliers veteran Kyle Korver is a strong candidate to be traded, given the team’s woeful start. One report suggests that the Philadelphia 76ers remain a strong contender in any potential deal, especially after the Sixers acquired veteran forward Jimmy Butler on Saturday.

Kevin O’Connor of The Ringer looked at how the 76ers are looking for other veterans to surround their talented young players and Butler. That group includes Korver, according to O’Connor:

“They talked a trade with the Cavaliers for Kyle Korver during the offseason and retain interest now, according to league sources.”

Korver was originally acquired by the Cavaliers in January 2017 and was seen as a player who could help deliver the franchise’s second consecutive NBA title. While the team managed to reach the finals in each of the next two seasons, they failed to win another championship.

The Cavaliers are now in full rebuilding mode after losing 11 of their first 12 contests this season. The 76ers potentially see Korver in the same manner that the Cavs once did less than two years ago.

Exactly what the 76ers are willing to give up for Korver is unknown. However, the fact that he turns 38 in March may not result in the first-round pick the Cavs likely want.

Any deal involving Korver this year will be an option for the Cavs until the February trade deadline. Given the current state of the franchise, he’s likely to be one of a number of veterans who could be changing uniforms relatively soon.