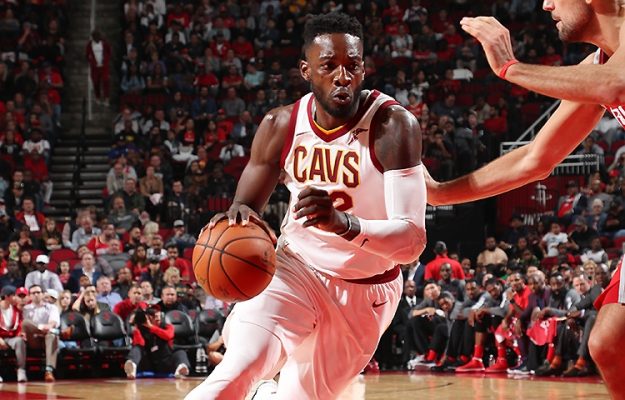 (Houston, TX) — Missed opportunities in the fourth quarter proved to be costly for the Cleveland Cavaliers as they dropped a close 117-113 decision to the Houston Rockets at Toyota Center on Thursday night. The contest marked the first of a four-game road trip for the Cavaliers.

The Cavaliers’ Jeff Green hit a jumper from the top of the key with 1:39 left in the game to make it a 113-112 game in favor of the Rockets. On the ensuing possession, a James Harden miss resulted in a mad scramble for the ball, ultimately turning into a three-point play for the Rockets. While the Cavs managed to make it a two-point game with 57.2 seconds left, that would be as close as they got for the remainder of the contest.

The chief problem for the Cavaliers during the final period was the nine offensive rebounds the Rockets corralled, which helped effectively negate the latter’s miserable 26 percent shooting from the field. Overall rebounding was also a problem throughout the contest for the Cavaliers, who were on the short end of a 45-26 advantage in that category.

LeBron James led the Cavs with 33 points, adding seven assists and four rebounds, while the bulk of Green’s 27 points off the bench helped avoid a first-half blowout to the Rockets. The only other Cavaliers to score in double figures were Kevin Love with 17 points and six boards, and J.R. Smith with 13 points.

“I think, more than anything, it gives him a notion of why he’s here and what we can get from him,” James said after the game about Green’s performance. “As his teammates, we cheer for all our teammates and we want all our teammates to go off like that. Like Swish (Smith) did the other night, like D. Wade (Dwyane Wade) went off in the game we lost, but he went off.

“But at the end of the day, when you’re trying to feel you way around a new team or you haven’t been playing up to your standards and you have a game like this, it’s better for you individually. So I think it’s going to be individually for Jeff than what it does for us as a team.”

At the outset, the Cavs began the game by connecting on 7-of-8 from the field to take an 18-12 lead following five minutes of action. However, for the remainder of the quarter, the Rockets dominated, using a 24-7 run to end the period with a 36-25 advantage. The chief reasons for that surge were the Cavs’ 2-for-11 shooting from the field over the remainder of the quarter and the 14-6 rebounding edge by the Rockets.

Houston then scored the first nine points of period number two to take their biggest lead of the game at 45-27. The Rockets held a solid 53-36 advantage with 8:31 to go before intermission when the Cavaliers erupted with a 31-12 run to take a 67-65 halftime lead.

The chief driver in that second-quarter surge was Green, who came off the bench to score 20 points during that period. By the time the period had ended, the Cavaliers shot 74 percent from the field during those 12 minutes, aided by many of the baskets coming on layups and dunks.

When play resumed, Houston took back the lead and eventually held a 100-93 advantage by the end of the period. Doing most of the damage for the Rockets was James Harden, who notched 15 points, while the key stretch came in the final four minutes of the quarter, when the Rockets scored 10 of the final 14 points.

“I like the way we played tonight. We stuck to our game plan for close to 48 minutes,” James said. “No matter what was going on, the fouls that were called at times, some that looked like they could go our way, some that didn’t go our way, the step-back threes that James was hitting. You’ve gotta live with something. One thing we can do better is cleaning up the offensive rebounding. It’s already hard enough to guard a team that shoots 45 threes a game and then you give them another opportunity to do that and put them on the free-throw line. We played a pretty good game, but I’m not here for moral victories. It’s not what I’m about.”

The Cavaliers return to action on Saturday night, staying in Texas to face the Dallas Mavericks. Tipoff for that contest will be just after 8:30 p.m. ET