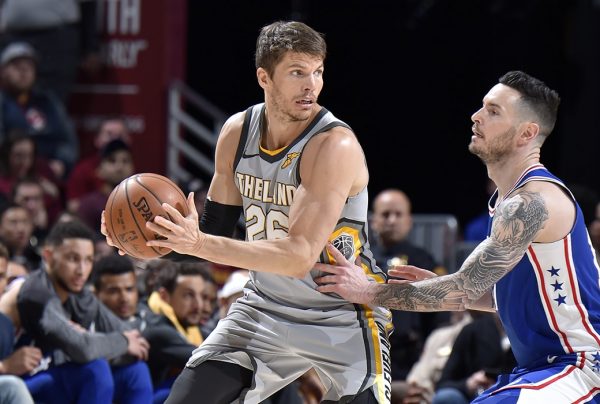 Fresh off a blockbuster trade that sent Jimmy Butler to Philadelphia, the 76ers are reportedly looking to add to their talented roster by trading for Cleveland Cavaliers sharpshooter Kyle Korver.

Following a commercial break during a recent game between the Boston Celtics and Portland Trail Blazers, former NBA big man Brian Scalabrine essentially came out and admitted that the 76ers are in the process of getting a deal done for the veteran shooting guard.

Over the weekend, it was reported that the Sixers were already interested in Korver. Considering the fact that the Cavs look ready to tank this season, it stands to reason that they will be shipping veterans off for picks or young talent wherever they can.

At the moment, the most attractive assets the 76ers have is a 2019 first-round pick and former first-overall draft choice Markelle Fultz, who has continued to struggle in his second year as a pro. It is unclear if the Cavs could convince Philadelphia to part ways with either of those pieces for the 15-year veteran, but they might be willing to do so now that they are clearly in the midst of a win-now moment.

Whatever happens, it seems likely that Korver will not play out the rest of the 2018-19 season. Thanks to his veteran attitude and ability to shoot the ball from deep, he would be a valuable addition to any team that is looking to add another offensive weapon.

Hopefully, the Cavs are able to get some promising assets in return.