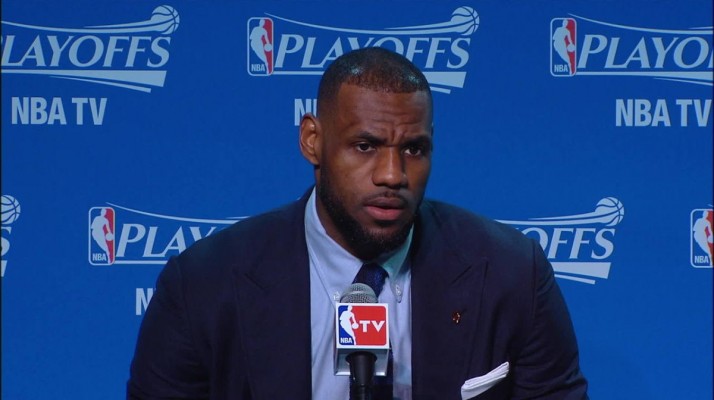 Less than 24 hours after the Cleveland Cavaliers’ opening game 99-92 loss to the Chicago Bulls on Monday night, LeBron James was more than willing to accept the blame for the way the team played in defeat.

Despite narrowly missing a triple-double with 19 points, 15 rebounds and nine assists, James focused more on his six turnovers and his nine of 22 outside shooting, terming his performance,“unacceptable.” In the latter case, making only three of his 11 second-half attempts was especially upsetting to the 12-year veteran.

James also noted that his usual “feel-out” process about an opponent will likely have to change.

“Last night it was little bit too much feel-out,” said James. “I think I only had two shots at one point. I just was not aggressive offensively as I was defensively.” He specifically cited the absence of Kevin Love as the basis for such thinking.

To get off to a faster start, James plans on watching plenty of video from Monday’s game in an attempt to garner some hints about what went wrong. Of special note will be crafting a better defense against Chicago’s open looks that saw them connect on nearly 85 percent of their 26 shots in that area. In addition, the 56 percent field goal shooting during the first three quarters can’t continue.

Despite James’ attempts to absorb the hit, Cavs head coach David Blatt spreads the blame around for the loss, saying, “Teams win and lose games and everyone has to give a little bit more at both ends of the court. Our margin for error is smaller and we have to make up for that with 48 minutes of multiple effort on the part of everyone.”

If there’s any consolation for Cleveland fans, it’s the fact that James tends to bounce back after games in which he has more than five turnovers. This season, the Cavaliers’ record in that situation is 14-2, with both losses coming after extended layoffs for James: on January 13, in his first game back after sitting out two weeks because of injuries, and last night.

Still, the Cavaliers can’t afford to be down 0-2 heading into a pair of road games that could conceivably end their season. “You got to have a little bit better sense of urgency in Game Two,” said James.

James’ teams have won four different series when trailing 1-0, with half of those coming against the Bulls. The Cavs’ season may likely depend on history repeating itself on Wednesday night when tipoff takes place just after 7 p.m E/T.