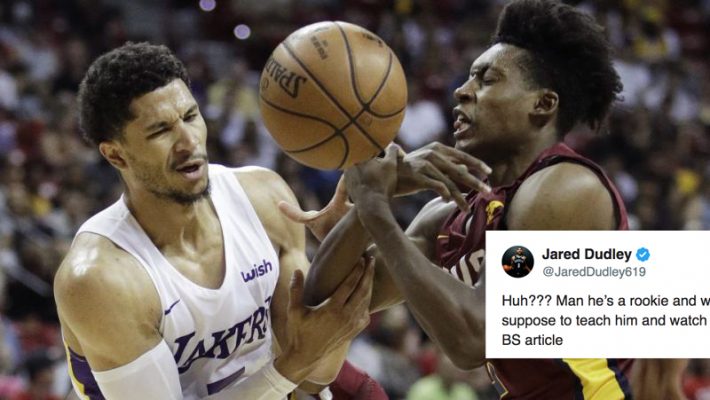 Criticism of Cleveland Cavaliers rookie guard Collin Sexton by some of his veteran teammates over the weekend didn’t sit well with Brooklyn Nets veteran forward Jared Dudley. That’s why he took to social media to criticize the actions of those nameless Cavaliers.

Huh??? Man he’s a rookie and we’re 8 games in! Veterans are suppose to teach him and watch film not give your quotes about a BS article https://t.co/54NxGM4EbX

Those Cavs veterans were critical of things such as Sexton’s early play and his alleged refusal to take their advice to heart. Such comments of frustration are to be largely expected from a team that’s gone from four consecutive trips to the NBA Finals to one that’s won just once in their first nine games.

The 33-year-old Dudley’s preaching of patience likely stems from his own NBA journey that’s seen him stay in the NBA for what’s now his 12th season. He began as the 22nd overall pick in the 2007 draft, though the Nets are his sixth different team.

The growing pains of any rookie are inevitable, with Sexton no exception. As the eighth overall selection in last June’s draft, he’s seen as the centerpiece of the Cavaliers’ rebuilding effort.

Given the team’s disastrous slow start, which has included the dismissal of head coach Tyronn Lue, that effort could take quite a while. One thing that seems certain is that Sexton will end up outlasting those veteran critics currently on the Cavaliers roster.