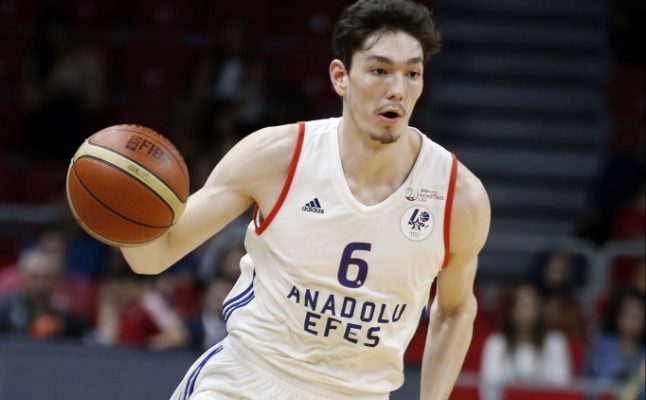 While this year’s Cleveland Cavaliers roster is still unsettled, one addition to the 2017-18 unit figures to be the team’s first 2015 draft pick, Turkish swingman Cedi Osman. Most speculation of this nature usually comes from unnamed sources, but this particular bit of information appears to be coming from the source itself.

The 6’8″ Osman indicated his plans while discussing a variety of topics on a EuroLeague blog. In noting how he hopes to help his team, Anadolu Efes, win the league title, he wrote that he’s using that motivation as a springboard toward playing in the NBA next season.

“I hope that the season will be successful for every member of the team and that I will be ready to play in the NBA next season. That’s my goal,” said Osman.

That team will presumably be the Cavaliers, who acquired Osman’s rights after he was selected as the 31st player in the 2015 NBA Draft. That selection was made in part to deal with salary cap issues at the time and with the understanding that a few years of player development at the international level would prepare him for the rigors of the NBA.

In his first two seasons with Anadolu Efes, Osman has averaged 5.7 points and 3.0 rebounds in 16.8 minutes per game.

Osman’s role model in striving for the NBA is former teammate Dario Saric from Croatia. Saric was drafted with the 12th pick of the 2014 draft by the Orlando Magic. His rights were then dealt to the Philadelphia 76ers, who signed him this past July.

“I know that he is very happy, because he is finally in the NBA. He also has big goals and I know that he will do great,” Osman said.

The preparation to become a Cavalier is already something Osman has taken under consideration, even if it’s only connected to playing a video game.

“When I am at home, I also spend time playing NBA 2K, like many of my teammates do,” Osman said. “I usually pick the Cleveland Cavaliers.”

Some speculation exists that the reason that the Cavaliers are reluctant to offer J.R. Smith a long-term deal is because Osman may be able to offer a long-term solution to that slot upon his arrival next season. Of course, replacing that hole this season continues to be an issue.