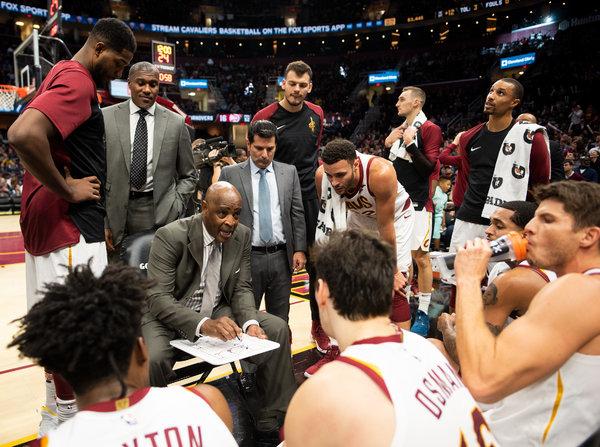 According to a weekend report, the Cleveland Cavaliers are experiencing a locker room divide between the team’s veterans and its younger players. Through nine games in the 2018-19 season, the Cavs have just one win. It seems like the lack of success on the court and drama off of it are starting to have an impact in the locker room.

The divide was reported by Joe Vardon of The Athletic, who broke down where the lines are being drawn.

“In on the record commentary, time and again, veterans like Tristan Thompson have made clear there is a divide between the Cavs’ holdover vets from the LeBron [James] glory years — like him, [J.R.] Smith, [Channing] Frye, and [Kyle] Korver (Tristan didn’t mention [Kevin] Love, who’s gone from the team after foot surgery) — and the team’s mostly unnamed younger players.”

Vardon went on to explain that when the team’s vets speak disparagingly about the younger players on the roster, they are more often than not referring to rookie point guard Collin Sexton.

“It’s becoming increasingly clear that when you hear a Cavs veteran talk about younger players not knowing their role, or knowing how to win, or what to do on the court, they mean Sexton,” he wrote. “Throughout the organization, the line on Sexton is that he does not ‘know how to play.’ He doesn’t know how to defend the pick and roll. He doesn’t know how to set up teammates as a point guard. He’s playing 25 minutes a night, averaging 11.1 points and 2.2 assists (2.1 turnovers) and is shooting 22 percent from 3-point range.”

Vardon later noted that while there is a divide, the vets do not necessarily dislike Sexton. They rather know his weaknesses and would like to see the former University of Alabama standout work to improve his game.

Most fans know that in sports, winning fixes everything. Unfortunately for the Cavs, it doesn’t seem like there’s going to be a whole lot of winning this season. Hopefully, the veterans and younger players on the Cavs roster will learn to see eye to eye as the season progresses.