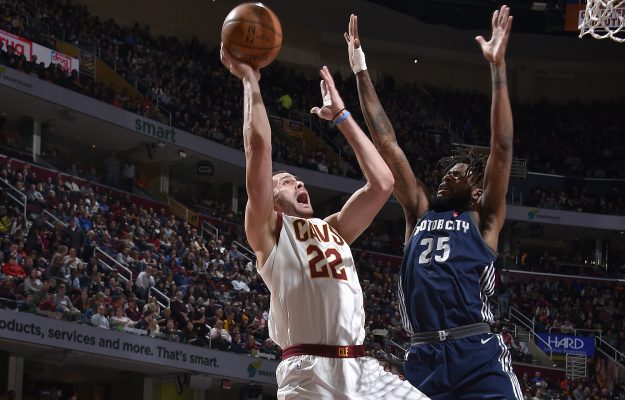 (Cleveland, OH) — Combining 53 points from LeBron James and Larry Nance Jr. with a pair of strong third-quarter runs helped the Cleveland Cavaliers put an end to their two-game losing streak with a 112-90 victory over the Detroit Pistons at Quicken Loans Arena on Monday night. The short-handed Cavs were without the services of both starting center Tristan Thompson and veteran reserve Jeff Green, with both players out due to injuries.

The Cavaliers led by five at intermission and went on a 17-5 run to start the second half, which gave them a 71-54 lead. While the Pistons answered by scoring 10 of the next 13 points, the Cavs ended up settling the issue with a 16-6 surge in the final four minutes to take a 90-70 advantage into the final quarter.

James was the focal point of the offense in the third, scoring 15 of his 31 points on the night. As a team during the quarter, the Cavs managed to connect on 63 percent (12-of-19) of their shots from the field. In that final period, the Cavaliers were never seriously threatened, allowing James to sit out those final 12 minutes.

“We needed it,” James said about the win. “It was the first time in a long time that I sat out the whole fourth quarter and felt good about it. We have a long road trip ahead, so it was a good win for all of us.”

In addition to those 31 points, James grabbed seven rebounds and handed out seven assists. Meanwhile, Nance managed to pick up a double-double in the first half and ended his night with 22 points and 15 rebounds. Both were career-highs in his first start since joining the Cavs last month.

“Larry was great,” Cleveland head coach Tyronn Lue said during his postgame press conference. “His energy and keeping [Andre] Drummond off the glass was huge.”

Four other Cavs ended their evenings by scoring in double figures, including Rodney Hood with 13 in a starting role. Hood replaced Cedi Osman in that capacity, with Osman tallying 12, while the duo of Jordan Clarkson and Kyle Korver chipped in with 11 points apiece.

“That was a big confidence boost for our team, especially on defense,” Hood said.

The lack of depth in the paint due to the absence of Thompson and Green was evidenced by the fact that the rarely used Ante Zizic saw 16 minutes of action. The big man put together an effective performance when providing Nance with an occasional breather, scoring six and grabbing six boards.

“Being down in Canton, getting a lot of playing time and running our plays gave him a lot of confidence,” Lue said about Zizic.

The Cavaliers now begin a six-game road swing that will almost exclusively focus on teams from the Western Conference. The first of those matchups comes on Wednesday night, when they face the Denver Nuggets in a game that will tip off at 10:30 p.m. ET.