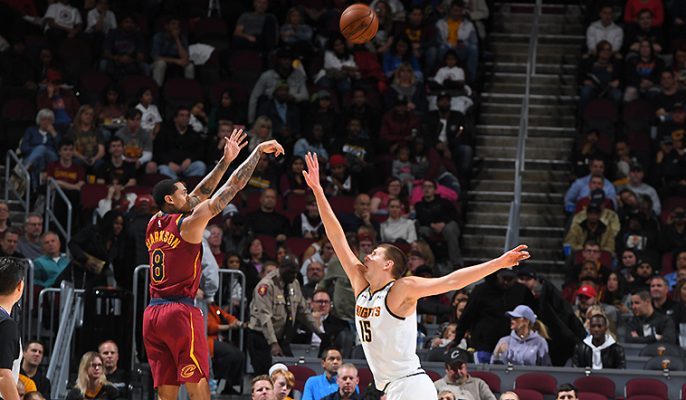 (Cleveland, OH) — A solid start gave way to self-inflicted wounds and defensive breakdowns as the Cleveland Cavaliers fell to the Denver Nuggets by a score of 110-91 at Quicken Loans Arena on Thursday night.

The defeat drops the Cavaliers’ record to 1-7 on the year and marks the first loss for interim head coach Larry Drew.

Jordan Clarkson scored 17 points off the bench to lead the Cavaliers scorers, while also adding four rebounds. Cedi Osman ended up with 13 points, though only five of those came in the final three quarters, while rookie guard Collin Sexton contributed 12 points.

The duo of Tristan Thompson and George Hill scored 10 points apiece to round out the Cavs’ scorers in double figures.

Once again, the Cavaliers’ second-quarter woes resurfaced as they watched the Nuggets outscore them, 35-15 over the 12-minute period. The Cavs were their own worst enemy here because of the seven turnovers they committed after having none in the first quarter.

“We started really good and then in the second quarter, our energy was low,” Osman said. “We started taking bad shots and they started getting rebounds.”

In addition, shooting from the field dropped off for the Cavaliers and they headed into intermission connecting at just a 36 percent rate in this area. The chief culprits in this area were starters Rodney Hood and Sam Dekker, who combined to miss all 10 of their field-goal attempts and finished just 4-of-19 for the night.

“We didn’t play well in the second quarter,” Drew said. “We turned the ball over, couldn’t make shots, couldn’t get back on defense. We lost the momentum and couldn’t recover. We couldn’t sustain the energy we had in the first quarter.”

Things got even worse in the third period, when Denver connected on 10 straight shots from the field and eventually ended the quarter holding an 83-66 lead. The Cavaliers seemingly had no answer for the fluid ball movement of the Nuggets, who ended the night with assists.

“We were coming out aggressive and throwing the first punch,” Thompson said. “Then guys started to stray away from the game plan and they pounced on it.”

Another area that killed any hopes of a comeback was the Nuggets’ domination on the glass in the third quarter. Aggressively hauling down 14 of the 17 boards during the period, Denver collected six on the offensive side. That gave them multiple second-chance opportunities to pull away.

“It’s tough, because we were playing the whole 24 (seconds), then they get another shot,” Sexton said. “In those situations, we have to keep fighting.”

The final quarter saw the Cavs offer no threat at all, with the Nuggets leading by as many as 26 before both teams emptied their benches to finish the contest.

“We have to play with more energy, we have to trust each other on defense,” Osman said. “I think everything comes from defense, but when we give up easy shots or three’s, our energy drops.”

At the start, a tight first few minutes changed when the Cavaliers ran off seven unanswered points in just over a minute to take a 12-4 lead. They were able to eventually make it a 12-point lead to end the quarter, with Osman accounting for eight points during the period.

At the time, the Nuggets appeared to be lagging after playing an overtime clash on Wednesday, an assessment which proved to be inaccurate.

“Bad habits are something we’ll try to catch by sitting them down and explaining things,” Drew said. “We have to stick with it.”

The Cavaliers will begin a brief two-game road swing beginning on Saturday night when they face the Charlotte Hornets. That game will tip off just after 7 p.m. ET.