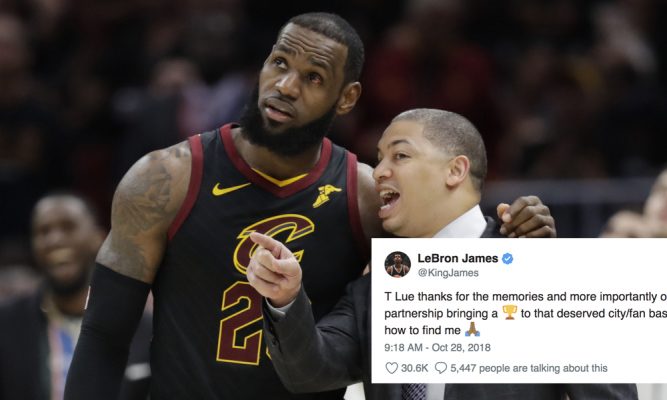 Shortly after it was announced that Cleveland Cavaliers head coach Tyronn Lue had been fired, former Cavs star LeBron James took to Twitter to thank Lue for all the memories and accomplishments they shared during their time in Cleveland.

T Lue thanks for the memories and more importantly our partnership bringing a ? to that deserved city/fan base. U know how to find me ??

Lue was named the head coach of the Cavs on Jan. 22, 2016. Just a few months later, Lue and his players were hoisting the Larry O’Brien Championship Trophy after coming back from a 3-1 deficit in the NBA Finals to defeat the Golden State Warriors.

Sadly, that mountain top was not reached during the following two seasons, and after James decided to leave this offseason in free agency, many predicted that Lue’s days in Cleveland were numbered.

After an 0-6 start to the 2018-19 season, and reported disagreements with general manager Koby Altman and team owner Dan Gilbert about player lineups, it makes a certain amount of sense that the front office felt it was time for a change. Still, it is surprising news nonetheless.

In the end, the NBA is all about winning. Over the last six games, Lue proved that he was simply not ready to lead this team now that James is no longer there to help him. While he may have been the perfect coach for the James era in Cleveland, that time is now clearly over.

Larry Drew will serve as the interim coach in Lue’s absence. Time will tell what kind of coach the Cavs believe can help them usher in a new era of success.