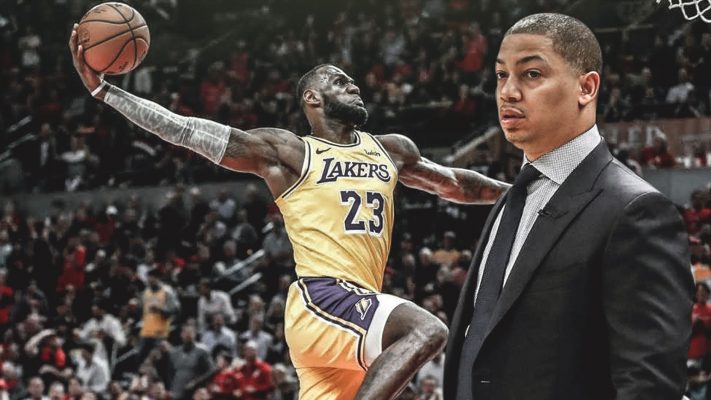 More Ty on LeBron last night. Please, try not to turn this into a Twitter dumpster fire. He was laughing when he said: "It’s like he lost his powers. That Cleveland black and Cleveland maroon, and then go purple and gold, for a big guy like that, it’s like he took his powers away

James made his decision to join the Lakers on the first day of free agency in July, ending his second stint with the team. During the previous four seasons, James had led the Cavaliers to four consecutive trips to the NBA Finals. That remarkable stretch included the Cavaliers’ comeback in the 2016 Finals that culminated with James winning Finals MVP honors.

When James returned to Cleveland in 2014, Lue was set to begin his first year with the team as an assistant coach. In January 2016, Lue was elevated to the head coaching position and subsequently led the team to the franchise’s first-ever league title. With James playing an integral role in making that championship possible, Lue was able to parlay that achievement into a lucrative new five-year contract.

Now without James, Lue has the challenge of leading a rebuilding Cavaliers team back to the playoffs. Any postseason run likely won’t include another trip to the Finals, but James is also facing steep odds in reaching his ninth consecutive Finals. That’s because the Lakers are in a similar position to the Cavaliers and face the additional challenge of competing against the likes of Western Conference powerhouses Golden State and Houston.

Lue and the Cavaliers will face James and the Lakers twice this season, with the first contest taking place at Quicken Loans Arena on Nov. 21. The rematch will take place in January at Staples Center in Los Angeles.