J.R. Smith and Tristan Thompson mock Jayson Tatum after he gets crossed by Sam Dekker 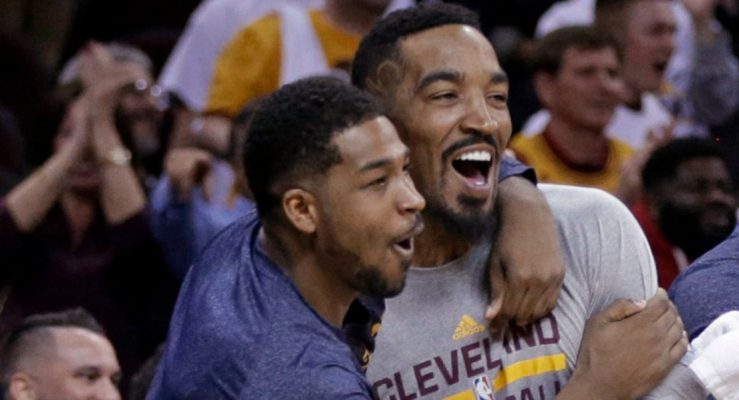 The Cleveland Cavaliers have begun their 2018 preseason with two consecutive victories over the Boston Celtics, the most recent coming in a 113-102 win at Quicken Loans Arena on Saturday night.

During another strong performance during the second quarter, both J.R. Smith and Tristan Thompson found time for some joking around after one of the team’s newcomers, Sam Dekker, offered up an ankle-breaking crossover dribble on the Celtics’ Jayson Tatum.

Thompson provided a good portion of the comedy for the Cavaliers, having plenty of time to perform since he was one of three starters sitting out the exhibition clash. As in the team’s Tuesday night opener in Boston, the Cavaliers managed to build a comfortable lead during the second quarter and then ride that wave to the win.

Dekker was acquired from the Los Angeles Clippers during the offseason, with the Cavaliers being his third NBA team since he was drafted as the 18th overall pick in the 2015 draft by the Houston Rockets. In contrast to Dekker’s checkered professional history, Tatum is beginning his second season in Boston after having been the third overall selection in the 2017 draft and delivering a solid first year.

The Cavaliers and Celtics first meet during the 2018-19 regular season on Nov. 30 when the two teams battle at TD Garden in Boston. Tatum will have his opportunity then to gain revenge on Dekker.