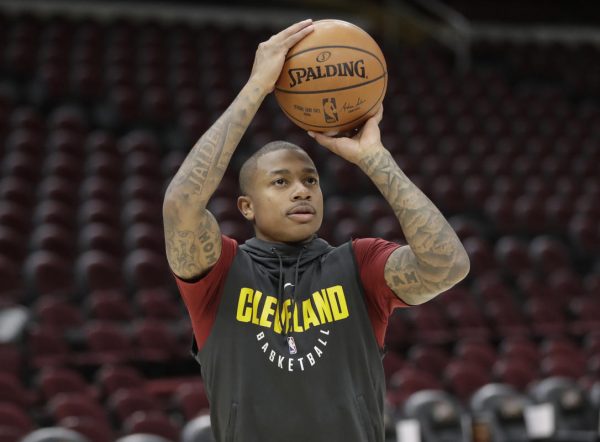 The Boston sports market is known for being one of the most unforgiving and unrelenting major markets in the country. They love you if you’re with them, but if you’re against them, they want very little to do with you.

Despite the fact that Isaiah Thomas was one of the city’s most beloved figures last year, it seems the Boston sports world is already prepared to move on.

On Wednesday morning, NBC Sports Boston play-by-play commentator Mike Gorman joined 98.5 The Sports Hub’s Toucher and Rich to gripe about the fact that Thomas is still discussing the great emotional impact the trade had on his life.

“I’m kind of tired with Isaiah, to be honest with you,” Gorman told hosts Fred Toettcher and Rich Shertenlieb. “He was a great player in the time that he spent with us — certainly had a year that was almost unmatched by anybody last year. But whether or not he ever speaks to Danny Ainge again, I don’t care. I really don’t care.”

The news regarding Thomas in Cleveland has been primarily about his hard-fought return back from a hip injury he sustained last season. Boston headlines, on the other hand, have often discussed how Thomas continues to express how shocked he was by the trade, and how it may have a lasting impact on his relationship with Celtics general manager Danny Ainge.

Back in October, Thomas made national news when he told Sports Illustrated that he may never speak with Ainge again. Gorman commented on Thomas’ relationship with Ainge, saying he only cares about what happens on the basketball court.

“I just want to see how he performs on the basketball court,” he said. “It’s almost like People magazine now. ‘Is he going talk to him? Is Danny going to respond to him? What will happen here? What will happen there? Will I get a tribute?’ Like just go off into the sunset gracefully, and we’ll see you in the playoffs.”

The commentator wasn’t done criticizing Thomas. While he did admit the 5-foot-9’s huge impact while in Boston, he also downplayed the place Thomas has in the heart’s of the Boston faithful.

“It was a great two and a half years,” he said. “Take nothing away from the kid’s performance. He was unlike almost anybody we had ever seen, especially in the fourth quarter of games last year. He had a remarkable run, but it was one year.”

He added that he believes the 2017 All-Star “overvalues his place in the pantheon of Celtics players.”

“You’re talking about probably the most talked about franchise in the history of almost any sport, right there with the Yankees,” he said. “I’m just tired of it.”

There’s no arguing that Thomas was only in Boston for a short time, but his impact cannot be overstated. He was as beloved a sports figure as anyone at the time of the blockbuster trade and his performance on the court was something that Celtics fans will not soon forget. It seems clear, however, that Gorman has no issue with putting what Thomas did for the city of Boston firmly in the past.

Luckily for the point guard, he will likely get the opportunity to have the last laugh this postseason. The Cavs and Celtics seem likely to meet in Eastern Conference Finals once again this season, and if that’s the case, Thomas will be able to show Boston, Cleveland, and the entire basketball world just how great of a player he truly is.