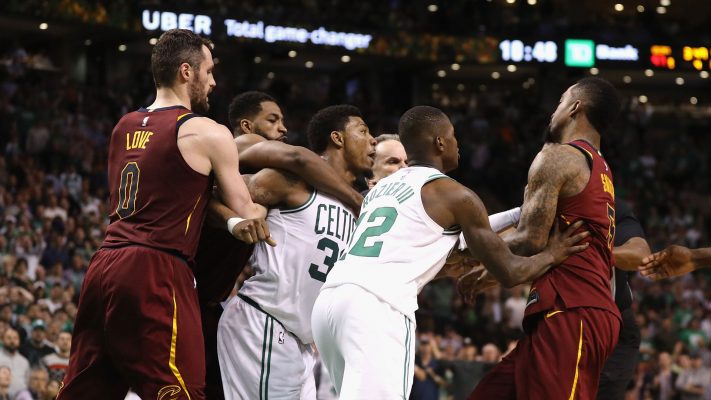 Some near-fisticuffs between Cleveland Cavaliers guard J.R. Smith and Boston Celtics guard Marcus Smart enlivened what would have been an otherwise uneventful preseason game on Saturday night.

Following the contest, it was clear that Smith wasn’t about to forget the incident and used social media to offer a challenge to Smart.

Meet me on street damn the back!! https://t.co/oP2jsVcyUc

More JR Smith on Marcus Smart: "For a guy who wants to be so tough in this situation, he leads the league in flops. Easily. You can’t flop as much as you do and then be tough.” More ? pic.twitter.com/1voRoaOUVa

The spark for this momentary furor came with 3:38 remaining in the first quarter of the Cavaliers’ 113-102 victory over the Celtics. Smith and Celtics reserve center Aron Baynes were jockeying for position in the paint, when the two players’ arms became entangled. Taking exception to Baynes then swinging him around, Smith proceeded to push the veteran.

Immediately after that push, Smart entered the picture by then pushing Smith from behind. That nearly led to an on-court fight until both players were separated by officials and teammates, with Smart being ejected from the game for escalating the situation.

Smith was assessed a technical foul and remained in the game, though he was able to get in a mocking goodbye wave as Smart left the court. The reality of the situation is that both players can expect to be fined by the NBA during the upcoming week.

Both Smith and Smart have reputations for volatility, with Smith having had a previous incident with the Celtics during the 2015 playoffs. In Smart’s case, his rap sheet has included pushing a fan during his college days and being ejected for low blows. The two players will be able to renew acquaintances on Nov. 30, when the Cavaliers travel to TD Garden to face the Celtics.