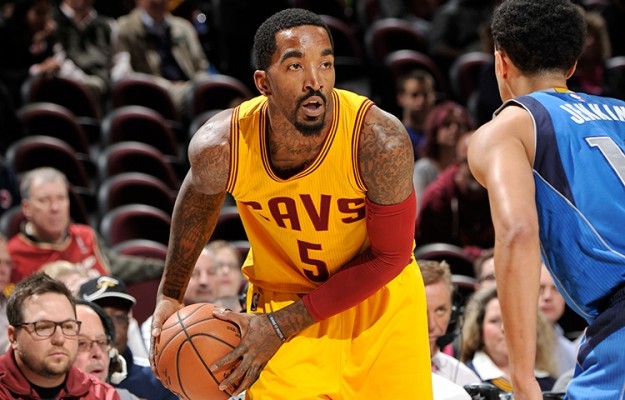 (Cleveland, OH) – Putting together a strong third quarter of play, the Cleveland Cavaliers finally entered the win column for the 2015 preseason with a 103-97 victory over the Dallas Mavericks on Monday night at Quicken Loans Arena.

Shooting problems had put the Cavaliers behind by seven at halftime of the preseason finale; however, they took their first lead of the game by using a 13-5 run to hold a 58-57 advantage, the last points coming on a J.R. Smith three-pointer. The lead then bounced back and forth over the next few minutes before an 18-9 Cavs run gave them an 83-74 lead.

By the end of the third, the Cavalier advantage stood at six at 85-79. One stark statistic in the comeback was that Cleveland matched its first half field goal output of 14 in just those 12 minutes.

After notching the first five points of the final quarter to take their largest lead at 90-79, the Cavs watched the Mavericks run off eight straight points to make the game tight once again. Dallas had a brief chance to possibly tie the game, but free agent guard Jared Cunningham’s steal and dunk boosted the lead back up to six at 92-86.

The Cavaliers got the lead up to eight and had the opportunity to push it to double digits again, but Dallas once again answered with five quick points to put them back in the game with just over three minutes left.

The Mavs then had a chance to tie the game at 99 with less than 30 seconds left, but a miss was converted into a pair of free throws by Cunningham with 11.6 seconds to go. Cunningham then put a cap on the night by getting the rebound and scoring with just 0.5 seconds remaining on the clock.

Smith was one of six Cavs in double figures, leading the team with 19 points, while new addition Jack Cooley collected 15 rebounds and Timofey Mozgov added nine. Cunningham, who is currently on the bubble for the last available roster spot, finished the night with nine points, five rebounds and five assists.

Both LeBron James and Mo Williams were held out of the contest, which gave Cleveland a final mark of 1-6 on the preseason.

Smith gave Cunningham a boost in his bid to make the team, saying:

“From day one, the kid’s been working hard, and made a name for himself.”

Smith also spoke about his own readiness for the regular season, and the eight-day break before the opener in Chicago:

As in some previous games, the Cavaliers got off to a slow start that put them immediately in a deficit. Their cold outside shooting saw them connect on just 26 percent of their attempts, while the Mavericks hit eight of their first 10 field goals and finished at better than 50 percent for the opening quarter.

By the end of the first 12 minutes, the Mavs held a 32-24 lead, with Cleveland drilling just one field goal in the last six minutes of that period.

One of those players struggling with his shot was Kevin Love, who hit only two of his first eight shots. Love then hit a pair of unanswered jumpers during the seven minute mark of the second quarter to get the Cavaliers back to within four. The power forward finished with 10 points and four rebounds in 22 minutes of action

Dallas got the lead back up to 10 at 52-42 with 1:35, but in the closing seconds, James Jones hit a three to put the Cavs seven behind at intermission.

With the grind of preseason now over, Cavaliers head coach David Blatt and his staff now have to reduce the roster prior to the October 27 opening contest on the road against the Chicago Bulls. While Cunningham is the favorite to win that final roster spot, it’s not guaranteed, with no timeline on when the final decision will be made.