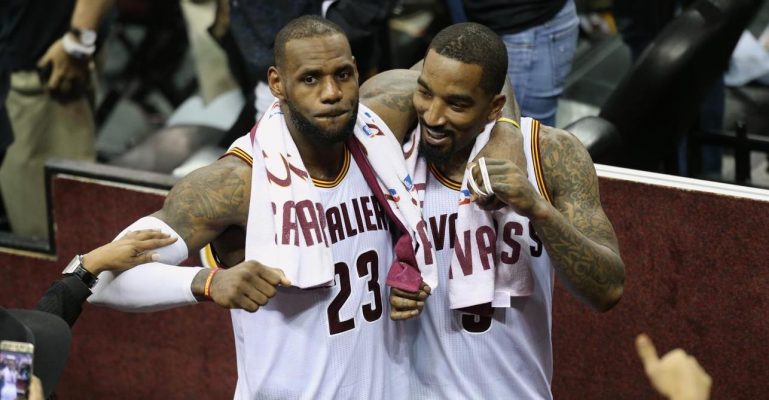 Three weeks ago, the landscape of the NBA would historically change as LeBron James decided to part ways with Cleveland Cavaliers and head to the West Coast to become a Los Angeles Laker.

Most of the Cavaliers responded within the first few days, including owner Dan Gilbert and forward Kevin Love. However, one player close to James has finally made a public post about the huge move: J.R. Smith.

Smith, 32, and James are really good friends. That was evident in 2016 when James emphatically pressed the Cavs to re-sign the shooting guard just before the regular season. Smith would eventually land a lofty four-year deal worth around $57 million.

The pair’s best memory came when they won the 2016 championship together against the Golden State Warriors. From being in the trenches down 3-1 to ultimately winning it all brought the team closer and produced a lifetime of friendships. James posted this emotional photo and caption about Smith on his birthday fresh after capturing the championship:

Happy Bday to my brother @teamswish!! Not a day goes by and I don't think of you kid! Proud of the man you've become over the years. Since day 1 when you were coming to Akron when u were still in HS to work with me I've always believed in you. Quite frankly more than u believed in yourself at times and I've never wavered cause i knew what you were all about. Loyal, caring, driven, misunderstood, passionate, trustworthy, etc etc etc. Most importantly TRUE!! Enjoy your day to the fullest and know i can't wait to get back to work on that court with u as my wing backcourt mate!! Let's go. #Automatic #Worrkkkk #Swisher #RocketLauncher #Champion

Yet, there were tense moments too. After Smith infamously held the ball and didn’t shoot or pass during a tied Game 1 in the 2018 NBA Finals, the pair’s relationship came under fire. Yet, the four-time MVP supported Smith and stood up for him the entire time.

Now, with both players in different cities after a messy ending in Cleveland, it is good to see the kind gesture on social media. James responded by commenting, “My G! ?. #FamilyTies ?.” So, it’s safe to assume all is good between the two champions.