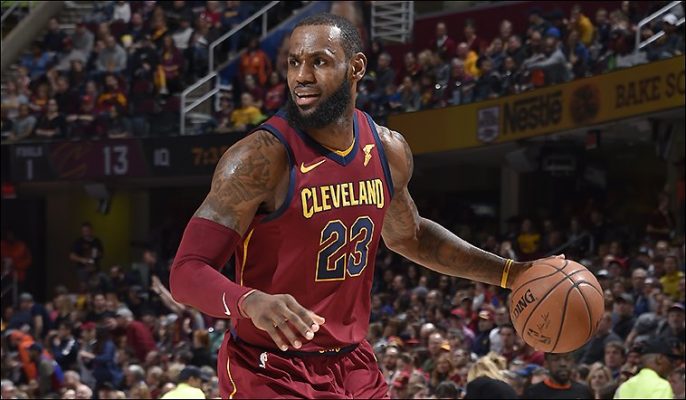 (Cleveland, OH) — A huge 26-9 run during the final eight minutes of the game helped the Cleveland Cavaliers hold off the upset-minded Detroit Pistons by a score of 121-104 at Quicken Loans Arena on Sunday night. The victory marks the first time in six weeks that the Cavs have won consecutive contests.

The game was tied at 95 with 7:33 left in the game, with Kyle Korver‘s long-range bomb just 18 seconds later sparking the surge, as five different Cavs players joined in on the scoring. Korver would then cap the run with 30.3 seconds remaining on the third of his 3-pointers on the night.

“It was fun. It’s been a while since I’ve been out there, so it felt good,” Korver said. “It felt like there were a lot of things happening and that’s how we need to play.”

Prior to that explosion, the Cavaliers had struggled to pull away from the pesky Pistons, who were able to stay in the game by hitting 14 3-pointers and dishing out 31 assists. A total of 10 of those 3-pointers came during the first half, which resulted in some attempted fixes at halftime that worked.

“We were on top of plays and we finished every defensive possession with a defensive rebound,” LeBron James said about the team’s ability to hold the Pistons to 17 points in the final quarter.

Both James and Kevin Love collected double-doubles on the night. James finished with 25 points, 14 assists and also grabbed eight rebounds, while Love tossed in 20 points and added 11 boards.

“We made some adjustments and kept Kevin in those rotations,” Cavs head coach Tyronn Lue said. “They had put us in some tough situations.”

Four other players finished scoring in double figures for the Cavaliers, with starters J.R. Smith and Isaiah Thomas scoring 15 and 14, respectively, and Thomas also handing out seven assists. Korver and Jae Crowder finished the night with 12 points apiece.

Smith was 4-of-7 from the field, all of them on 3-pointers. That output continued his improvement from his recent shooting slump.

“I’ve been watching a lot of film,” Smith said about the steps he’s taken to get back on track. “You’re just thinking too much. You just have to get back to basics.”

Channing Frye also had a solid night with seven points and seven rebounds, including an effective performance during the crucial fourth quarter.

“We were running like crazy men and the ball was finding energy,” Frye said. “Guys were just having fun.”

The first half saw the Cavaliers quickly fall behind 10-4 before going on a 21-5 run to take their largest lead of the half at 25-15. During this early going, the Cavs connected on a sizzling 10-of-13 (77 percent) from the field.

However, the remainder of the half saw their shooting touch desert them, which allowed the Pistons to go on a 30-15 run of their own once that hot start by the Cavs faded. Cleveland shot just 31 percent (10-of-32) from the field over this period, which included an even worse stretch of 5-of-23 at one point.

“When things slowed down, we got complacent,” Love said.

The Pistons would lead by as many as six in the latter stages of the second quarter, though the Cavaliers were able to cut that deficit in half in the closing seconds and found themselves trailing by a 61-58 score at intermission.

“Besides the fourth quarter last game, we’ve been consistent these last two games,” James said. “Though I didn’t like the second quarter (tonight).”

Both teams spent much of the third quarter trading the lead, with the Pistons taking an 85-80 lead with just over three minutes left in the period. The Cavs then delivered 10 unanswered points, helping them take a 90-87 advantage into the final quarter. The combination of six 3-pointers and 10 points from Thomas in the third served as the triggers to jumpstarting the Cavs offense.

The two teams will meet up again on Tuesday night, though that clash will take place in Detroit. Tipoff for that matchup will be just after 7:30 p.m. ET and be the first of back-to-back contests for the Cavaliers, who will return home to face the Miami Heat on Wednesday night.