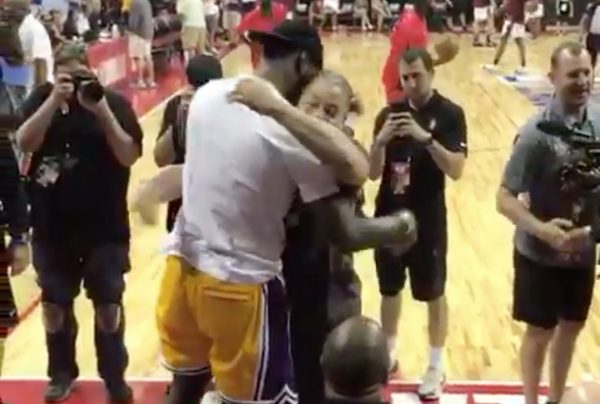 On Sunday afternoon, former Cleveland Cavaliers forward LeBron James made his first public appearance in the purple and gold. The Los Angeles Lakers star showed up to his new team’s summer league matchup against the Detroit Pistons, where he received a standing ovation.

While it began James’ new chapter with the Lakers, there was one moment that still captured the Akron native’s connection to the Cavs. During a game break, Cavaliers head coach Tyronn Lue walked over to James and emphatically greeted him.

The bond between James and Lue was strong while it lasted in Cleveland. After Lue took over for former coach David Blatt in 2016, the team went on to win the championship the same season and remained competitive over the next couple of years. The strong connection between the two played a large part in that success.

Last week, the 41-year-old coach shared his immediate thoughts and feelings upon hearing about the four-time MVP’s big relocation decision. While Lue said he was shocked and hurt, he totally understood the veteran’s choice. The video above shows no love was lost in the process.

Although Lue will be without the world’s best player, there will be plenty of new opportunities. In addition, the loss of the three-time champion drops the automatic expectation to compete for a ring every year. Lue will now get a chance to refine the playbook and coach his way under much less scrutiny. Before the 2016-17 NBA season, Lue signed a five-year contract extension to remain as the head coach of the Cavs.