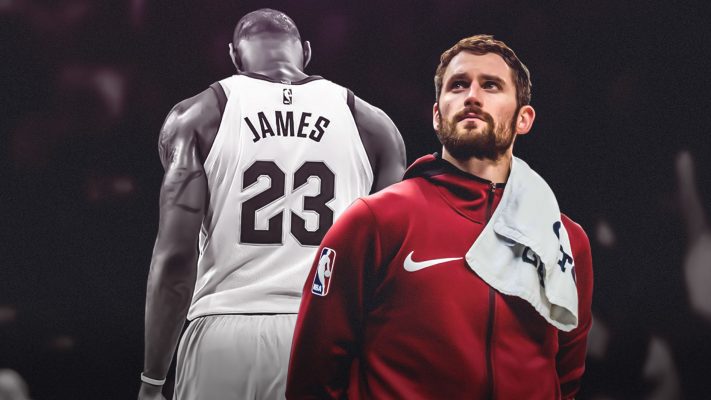 The impact of LeBron James‘ decision to leave the Cleveland Cavaliers to sign a four-year contract worth $154 million with the Los Angeles Lakers resonated throughout the NBA, especially with his now-former teammates. One of them, forward Kevin Love, spoke about the emotional message he passed on to James after hearing the news.

Love was at an event for the HBO series, “Ballers,” and joked about the obvious nature of the first question he’d be asked. Noting that he was relaxing with friends in the Hamptons community of Montauk at the time he heard the July 1 news, he mentioned that he subsequently made some calls and then sent James a text message later that evening.

“I told him I loved him. Told him I appreciated him and wished him good luck,” Love said.

The bond between Love and James was first forged when they were teammates on the 2012 Summer Olympics squad that won the gold medal in London, England. Two years later, after announcing that he was returning to play for the Cavaliers, James made a concerted push for the acquisition of Love from the Minnesota Timberwolves. That became a reality in late August 2014, which helped lead the Cavaliers to the most successful period in their 48 seasons in the NBA.

Four consecutive trips to the NBA Finals followed, with the pinnacle being achieved on June 19, 2016. That was when the Cavs became the first NBA team to come back from a 3-1 deficit in the Finals by defeating the Golden State Warriors. When the final horn sounded in Game 7, one of the lasting images of that historic night came when James emotionally hugged Love in celebration of the achievement of winning the league championship.

In the wake of James leaving, Love’s own status with the Cavaliers has been the source of mixed media messages. Some reports state that the Cavaliers won’t trade him, while others indicate that the team is open to the prospect. The fact that just one year from now, Love can opt out of the final year of the five-year contract he signed in 2015, helps crank up the rumor mill even more. Having been the subject of countless trade rumors throughout his tenure with the Cavs, Love likely won’t pay attention until gossip becomes reality.