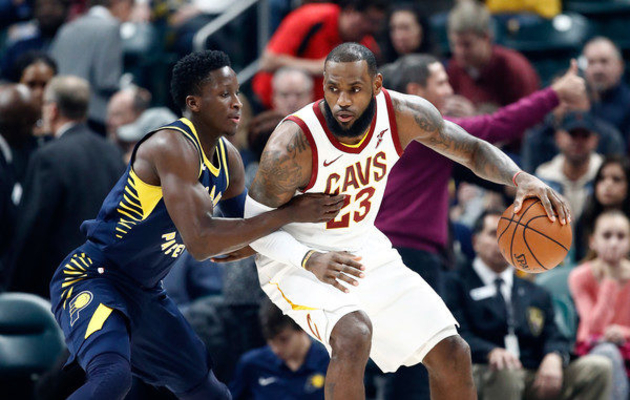 On the list of teams that are considered to have a chance at signing Cleveland Cavaliers forward LeBron James when he enters free agency, the Indiana Pacers are likely not even in the picture. Yet that didn’t stop their star guard Victor Oladipo from offering a recruiting pitch to James on Monday night.

TMZ Sports offered a quote from Oladipo shortly after he had won Most Improved Player at the NBA Awards show. The succinct message was an attempt to appeal to James’ insatiable drive to win more championships.

“Tell LeBron come to the Pacers. … If you want to win, come to Indy,” said Oladipo.

The 26-year-old Oladipo was acquired by the Pacers as part of the deal that sent Paul George to the Oklahoma City Thunder. In his fourth NBA season, he had a breakout year for Indiana, averaging 23.1 points, 5.2 rebounds, 4.3 assists and 2.4 steals per game.

During the Pacers’ seven-game battle with the Cavaliers in the first round of this year’s playoffs, Oladipo managed to increase his averages in the areas of rebounds and assists. After the Cavaliers emerged with a tight win in Game 7, James took time to acknowledge Oladipo’s contributions with a brief on-court discussion.

As earnest as Oladipo is about wanting James to join him, there’s effectively no chance that will happen. James has never spoken in the past about wanting to play there and the Pacers currently aren’t considered to have a solid chance to even make the NBA Finals, much less win it.