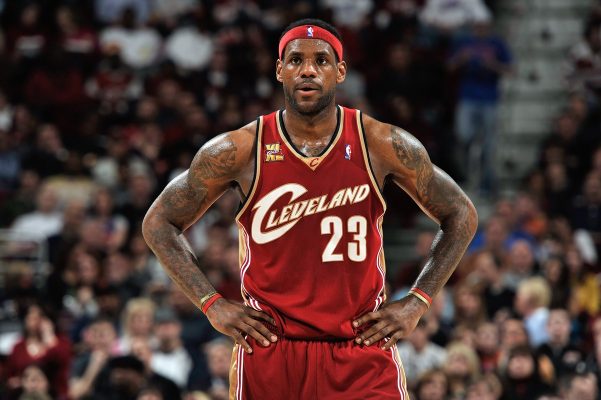 As disappointing as it is to admit, it’s starting to become evident that the Cleveland Cavaliers‘ season is going to most likely end in another NBA Finals defeat at the hands of the Golden State Warriors.

While LeBron James and company have put up an honorable fight through three games, the Warriors’ talent level has simply proven too high for a Cavs team that is in noticeable need of additional high-level playmakers.

Considering that fact, statements made by James on Thursday morning offered a pretty legitimate cause for concern regarding James’ uncertain future in Cleveland. While speaking to members of the press, James admitted that the talent level in Cleveland in 2010 wasn’t at the level that it needed to be to beat the best teams in the NBA at that time.

“I knew that my talent level here in Cleveland couldn’t succeed getting past a Boston, getting past the San Antonios of the league,” James said.

A reporter then subtly asked James if he felt a comparison between that 2009-10 Cavs roster to the roster of today was appropriate. He replied with a chuckle:

“You actually are trying to get me to say something.”

James did ultimately respond to the question, but he didn’t focus on the talent on the Cavs’ roster. Instead, the four-time MVP reflected on the immense talent that he and his teammates have had to play against in the last four NBA Finals series.

“Listen, at the end of the day, I’m living in the moment now. I went back for you for your question,” James said. “We’ve had an opportunity to win two of these games in this three-game series so far, and we haven’t come up with it.

“Obviously, from a talent perspective, if you’re looking at Golden State from their top five best players to our top five players, you would say they’re stacked better than us. Let’s just speak truth. Kevin Durant. You’ve got two guys with MVPs on their team. And then you’ve got a guy in Klay (Thompson) who could easily be on a team and carry a team, score 40 in a quarter before. And then you have Draymond (Green), who is arguably one of the best defenders and minds we have in our game. So you have that crew. Then you add on a Finals MVP coming off the bench, a number one pick in Livingston and an All-Star in David West and whatever the case may be. So they have a lot of talent.

“We have a lot of talent as well. We’ve been in a position where we could win two out of these three games. So what do we have to do? Do we have to make more shots? Is it we have to have our minds into it a little bit more? Is it if there is a ball on the ground we can’t reach for it but you’ve got to dive for it?”

Cleveland is still considered amongst the favorites to sign James when he becomes a free agent in a few weeks, but it is clear that his priorities still lie in playing alongside talented players and winning championships.

Whether or not that journey continues in Cleveland remains to be seen.