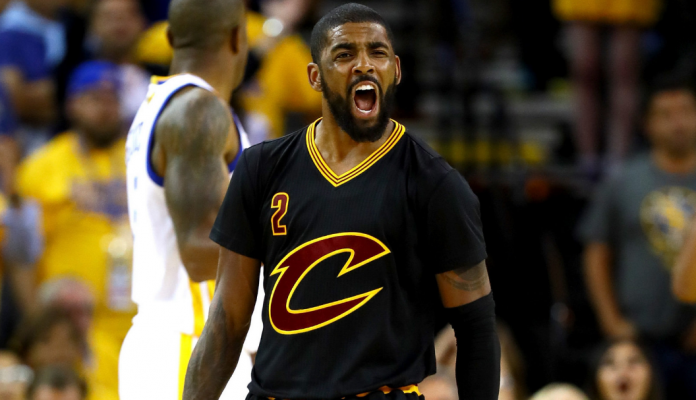 The Cleveland Cavaliers currently stand just one loss away from seeing their 2017-18 season come to an end. However, one anonymous Cavaliers player believes that the team’s 3-0 deficit against the Golden State Warriors is something that would have been reduced if the team still had Kyrie Irving on the roster.

Jason Lloyd of The Athletic offered up a number of different postmortems on the crushing 110-102 loss suffered by the Cavaliers in Wednesday night’s Game 3 of the best-of-seven series. Among them was this nugget:

“The Rockets pushed them to seven games in the conference finals and even held a 3-2 lead entering Game 6,” Lloyd wrote. “The Cavs are ‘this close’ to holding a 2-1 lead in this series. And as one veteran lamented after the loss Wednesday, ‘We’d be up 3-0 if Kyrie was still here. I have no doubt. Do you?'”

Irving was traded to the Boston Celtics last August after requesting a trade the previous month. When he was dealt, the point guard they received from the Celtics was an injured Isaiah Thomas. Only a month after returning to action in January, Thomas was traded as part of a roster overhaul that included veteran George Hill.

In the Finals series with the Warriors, Hill’s contributions have been limited. In Game 1, he missed a potential game-winning free throw in the closing seconds of regulation, with the Cavaliers then losing in overtime.

During a pivotal Game 3, Hill was hardly used during the crucial fourth quarter, with Cavs head coach Tyronn Lue choosing to insert Rodney Hood in his place. Hood, another newcomer from that February overhaul, had his first notable playoff performance in the game. Still, his final numbers were less than the usual production provided by Irving.

The absence of Irving is something the Cavaliers have attempted to frequently address during the course of the up-and-down season. Whether or not his presence would have changed things in the Finals will always be debatable, but the reality of coming up short again is staring the Cavs in their collective face.