Video: Kevin Durant Gets Owned by Rockets Fan Who Says He’ll Never Be as Good as LeBron 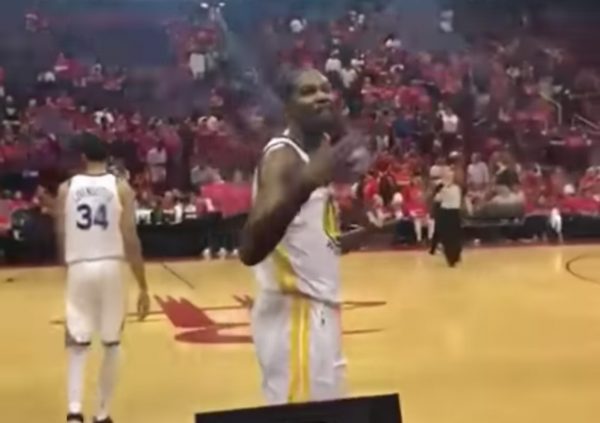 The city of Houston is reeling after Kevin Durant and the Golden State Warriors ruined its championship dreams in Game 7 of the Western Conference Finals on Monday night.

While the Rockets failed to get the win, at least one Houstonian in Toyota Center dealt Durant a loss. Before Game 7, one fan recorded some top-notch trash talking at the former MVP, including the assertion that Durant will never be the player that LeBron James is.

“KD you can’t win by yourself baby, you know that. You ain’t winning by yourself,” the Rockets fan yelled just a few rows back from the court. “You’ll never be better than LeBron.”

It’s impossible to tell what Durant said in response, but it is clear that the fan’s words certainly cut deep. By now it’s common knowledge that Durant has received quite a bit of criticism for joining the Warriors two summers ago. While he is on his way to his second straight NBA Finals since joining the Warriors, that achievement has been marginalized feat thanks to Golden State’s star-studded roster.

As for the fan’s assertion that Durant is not at the same level as James, an improbable Cleveland Cavaliers series victory over the Warriors would certainly back that up. James and company will look to do just that starting this Thursday night in Game 1 of the 2018 NBA Finals.