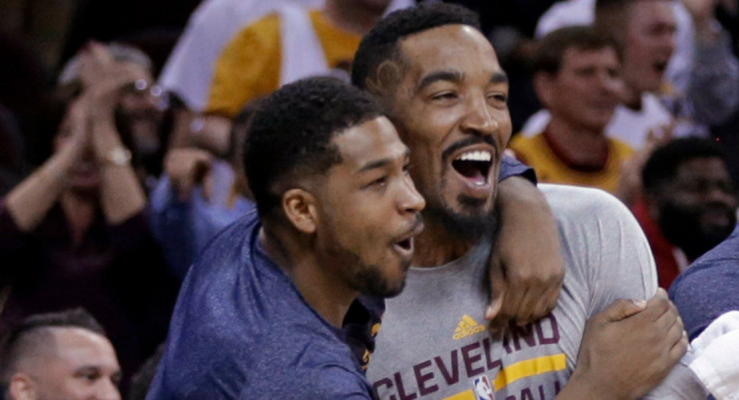 There was euphoria in the Cleveland Cavaliers‘ locker room as they celebrated another Eastern Conference championship. It’s the fourth straight such title that the Cavs have won with LeBron James leading the team to an improbable run to the 2018 NBA Finals.

The naysayers believed that James couldn’t carry this ragtag bunch that has been on a rollercoaster ride throughout the season. Even after Cavs general manager Koby Altman overhauled the roster with a number of new players at the trade deadline, it appeared as though Cleveland was on its way to an early exit in the postseason.

Yet here they are reveling in their spoils after an 87-79 Game 7 win over the Boston Celtics. Mercurial shooting guard J.R. Smith and the relentless Tristan Thompson were two of the biggest reasons for the victory Sunday night with the former scoring 12 points and the latter playing tenacious defense.

According to ESPN reporter Dave McMenamin, Smith and Thompson were deeply overwhelmed by the thought that they’ve now won four in a row in the East.

JR Smith, in the back of the trophy presentation, talking to himself: “Oh, man. Four in a row. That’s hard to believe.” Tristan Thompson then turns to him: “That’s some gangster sh—!”

They aren’t the only ones who couldn’t believe the Cavs’ good fortune. Prior to Game 7, the Celtics were favored to win, bolstered by a 10-0 winning streak at home during the playoffs heading into the deciding game.

The Cavs are headed to the Finals as underdogs once again but don’t be surprised if they pull off another upset in a season that has definitely dumbfounded everyone including the players themselves.