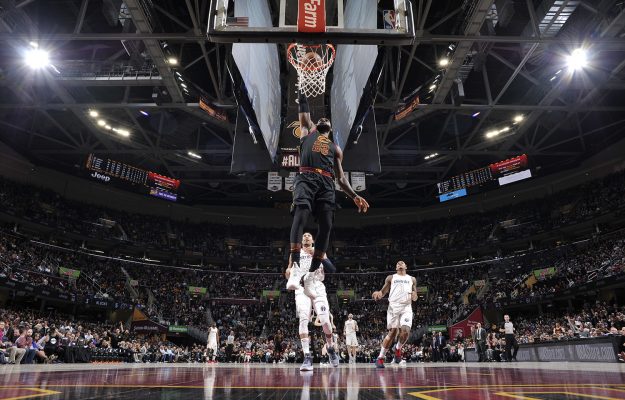 (Cleveland, OH) — Cedi Osman‘s steal and two free throws with 2.5 seconds left clinched a stunning fourth-quarter comeback for the Cleveland Cavaliers as they defeated the Washington Wizards by a score of 119-115 at Quicken Loans Arena on Thursday night. Over the final 7:35 of the game, Cleveland managed to put together a 32-11 run to move them one-half game ahead of the Philadelphia 76ers in the race for the third seed in the Eastern Conference.

All of those dramatics overshadowed the return of Cavs head coach Tyronn Lue, who had missed the previous nine games because of health issues.

“I was rusty, but they bailed me out tonight,” Lue said.

After watching the Wizards shoot 64 percent (27-of-42) from the field during the second and third quarters, the Cavaliers then appeared to see their chances of winning disappear as the Wizards outscored them 14-5 to start the fourth and took a 104-87 lead.

Cleveland began its arduous comeback with a 9-2 surge to cut the deficit to 10 with 5:32 to play. Then, after trailing 110-100, they scored 10 unanswered points to tie the game on two free throws from Rodney Hood with 1:50 left. Each team then followed with a 3-pointer, with John Wall’s jumper with 58.5 seconds left giving the Wizards their final lead of the game.

LeBron James split a pair of free throws to make it a one-point game with 52.9 seconds left, which was followed by a stop from the Cavaliers’ defense. That led to Jeff Green getting fouled with 21.4 seconds remaining, with the veteran converting both to finally give the Cavs the lead back.

“It’s been like four seasons into one,” James said. “I don’t even remember half of the wins we had early on in the season. I just think the past few weeks, we’ve been playing good ball.

“I know we had a pretty bad second and  third quarter, but we were able to turn around in the fourth and get some stops, execute offensively and get anther win on our home floor, which we like to do.”

After another Washington miss, James again split a pair of free throws to make it a two-point game. Wall then began a drive to the basket in the closing seconds before throwing the ball back to Osman, who was there for the steal. In that final quarter, the Cavaliers hit on 73 percent (11-of-15) of their shots from the field, compared to 40 percent (10-of-25) for the Wizards.

James, who scored 13 during the final period led all scorers with a double-double, scoring 33 points and handing out 14 assists, while grabbing nine rebounds. Those 13 points all came in the final six minutes, with James’ output outscoring the entire Wizards team during that time frame, 13-9.

Green was one of five other Cavalier players to score in double-figures with 21, while Kevin Love added 16 and hauled down six boards. Kyle Korver‘s 13 off the bench included a clutch 3-pointer that tied it at 113, while Hood and Jordan Clarkson picked up 11 and 10 points, respectively.

“It think it’s a big win for us,” Lue said when asked if the game was the biggest win of the season so far. “Those two Toronto games, them being the No. 1 seed. Going into Boston with the new guys was a big win for us. It was a big win, just seeing how they (Washington) play, if we have a chance to see them in the playoffs, I’ve got a lot of good adjustments for them, so we’ll see.”

The Cavaliers face a stiff challenge on Friday night as they travel to face those 76ers in a game that could go a long way in helping them clinch that third seed with two games to play.