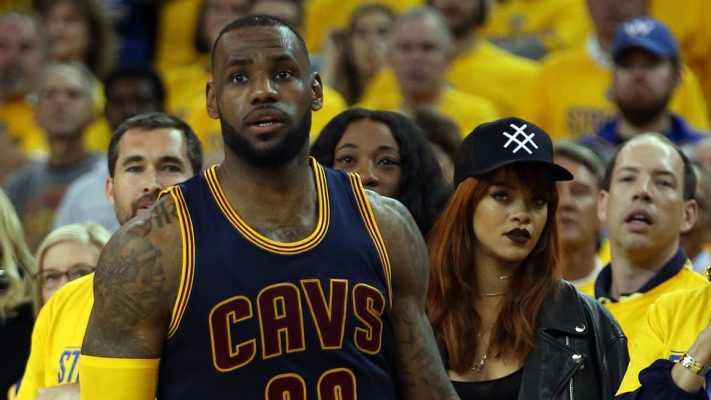 Celebrities follow and support NBA players all the time but Hollywood’s most famous personalities generally gravitate toward the league’s best players. In the case of LeBron James, one of his most ardent supporters is Grammy award winner Rihanna, who has been following his exploits for some time now.

After the Cleveland Cavaliers took care of business and defeated the Boston Celtics in Game 7 of the Eastern Conference finals, Rihanna posted an Instagram story of her riotous celebration while watching the game on her laptop.

That boisterous yell pretty much summed up the emotions of every Cavs fan around the world.

In last year’s NBA Finals, Rihanna took her commitment to supporting James to another level as she apparently yelled “Brick!” while the Golden State Warriors’ Kevin Durant was shooting a free throw.

Rihanna yells "Brick!" at Kevin Durant during at the free throw line, he then stares her down twice. ?

Later, Durant appeared to stare down the artist after nailing a 3-pointer.

Looks like Kevin Durant may have stared down Rihanna after that 3-pointer pic.twitter.com/Lkf3SEQ14Z

But her fascination for James doesn’t end there. The singer/songwriter and actress had a shout-out to James while rapping in her single, “Lemon,” which was released late last year.

Here are a few bars from the single with James’ name mentioned in it:

You can catch me, Rih, in the new La Ferrar’

And the truck behind me got arms

James’ fantastic Game 7 was definitely a cause for celebration and Rihanna demonstrated just how dedicated she is to the four-time MVP. Should the Cavs win in the Finals again this year, expect the artist to come up with another creative way to express her appreciation for James’ greatness.