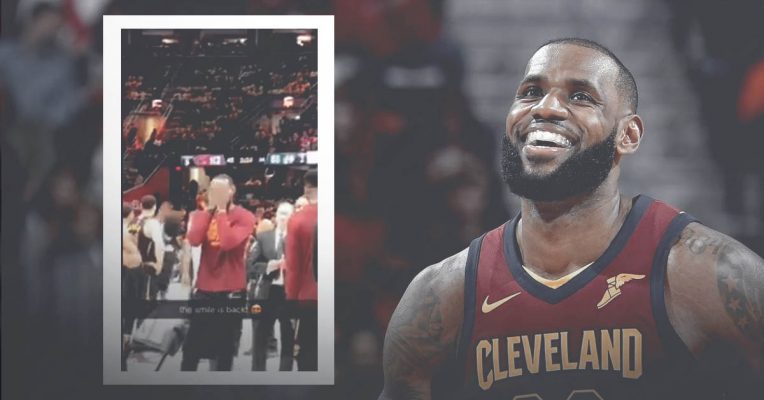 Game 3 of the Eastern Conference Finals gave Cleveland Cavaliers fans everywhere a reason to celebrate as the Cavs coasted to a blowout 116-86 win over the Boston Celtics. One young Cavs fan, LeBron James‘ daughter Zhuri James, had a different reason to celebrate altogether.

During the game, James was caught playing peek-a-boo with his young daughter who was sitting several rows away.

Bron playing peek-a-boo with his daughter during the game

This isn’t the first time James has interacted with his daughter during a home game, and it’s always a clear sign that the four-time MVP is enjoying himself on the court.

There were quite a few reasons for James to be enjoying himself during Saturday’s game. Not only did several of the Cavs role players step up in the game, James had yet another strong performance. He finished the night with 27 points, 12 assists, five rebounds, two blocks, and two steals. He also shot an impressive 66.7 percent from the field and finished a perfect 3-of-3 from beyond the arc.

Now, with Game 4 just over 24 hours away, the Cavs will have to refocus to prepare for the pivotal matchup. If they are able to win a second game in a row, the series series will be tied at two games apiece. If they lose, the Cavs will be looking at a nearly insurmountable 3-1 deficit.

Hopefully the Cavs jump out to an early lead once again so that James and his daughter can share yet another adorable moment together.