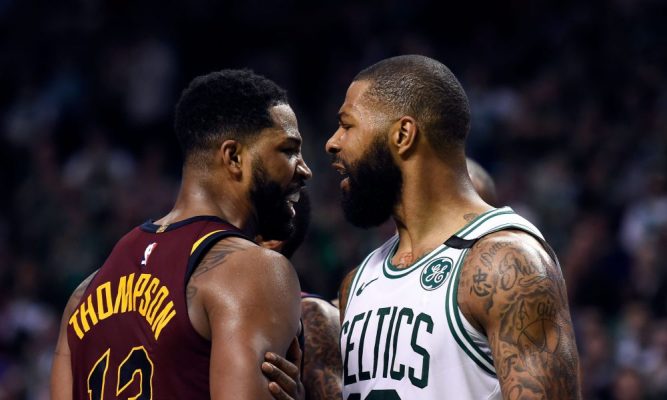 So far in the Eastern Conference Finals, the Cleveland Cavaliers have struggled mightily on both sides of the court. While the Cavs could certainly improve on the offensive side of the ball, according to big man Tristan Thompson, it’s going to be defense that gets him and his teammates out of the 0-2 hole they’re currently in.

On Thursday, Thompson talked about the importance of communication on the defensive side. He also offered a warning to any of his teammates who aren’t prepared to buy into working hard and staying vocal on defense in Game 3.

Tristan Thompson, on defensive miscommunications: “we’ve gotta talk. and if you don’t wanna talk, you can sit your ass on the bench.”

Thompson had a tumultuous start to the playoffs both on and off the court, but has since managed to earn himself a spot in the Cavs’ rotation. While his stats have not jumped off the page so far in the series against the Boston Celtics, as he is averaging just 8.0 points and 9.0 rebounds per game, he has undoubtedly offered a level of defensive tenacity that his teammates would be wise to replicate.

By the 6-foot-9 center’s words alone, it is clear just how seriously he and the Cavs are taking Game 3, and it’s no surprise why. They’ll be right back in the series if they are able to get the win on Saturday night, but if they lose, the series will be all but over.

Hopefully Thompson manages to inspire strong performances from several of his teammates on the defensive side in the upcoming contest. Cleveland will need that and more to come back from two games back and advance to the NBA Finals.