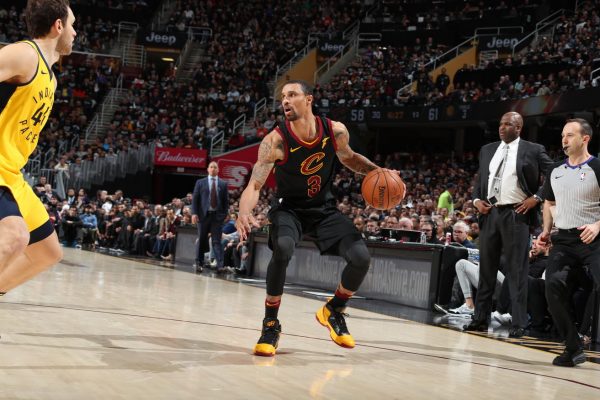 Cleveland Cavaliers superstar LeBron James was otherworldly in his team’s must-win Game 7 against the Indiana Pacers as he dropped a ridiculous stat line of 45 points, nine rebounds, seven assists and four steals.

The Cavs went on to beat the Pacers 105-101 and if it wasn’t for the contributions of his teammates, James likely would not have been able to take down the the scrappy Pacers on his own.

In yet another change to his starting lineup, Cavs head coach Tyronn Lue elected to go with a starting five which featured all players from last year’s roster: J.R. Smith, James, Kyle Korver, Kevin Love and Tristan Thompson.

James spoke on everyone’s impact after the game:

“We started the game with the guys that’s been in big games before: me, Swish (Smith), Tristan, Kev, and Kyle Korver. That’s been in Game 7s, that’s been in huge games before,” said James. “How do we split the game ball in half between Tristan and G. Hill (George Hill). G. Hill didn’t play the last three, came in the third quarter and gave us a huge lift, getting to the free-throw line, making plays for not only himself but for others. And Tristan was magnificent, protecting the rim, getting offensive rebounds, getting their bigs into foul trouble.”

Thompson finished the night with 15 pints and 10 rebounds and Hill did not see action until the third quarter. He played 19 minutes in the second half and provided a spark to the Cavs offense as James sat late in the third and the beginning of the fourth. Hill finished his night with 11 points, six rebounds, and three assists.

featuredGeorge Hillkevin lovelebron jamesnews tickerTristan Thompson
← Previous Story LeBron Speaks on What Went Wrong in Game 6 and What Cavs Need to Do in Game 7
Next Story → Video: LeBron Leaves Cavs Fan Hanging, Who Plays It Off Like a Boss