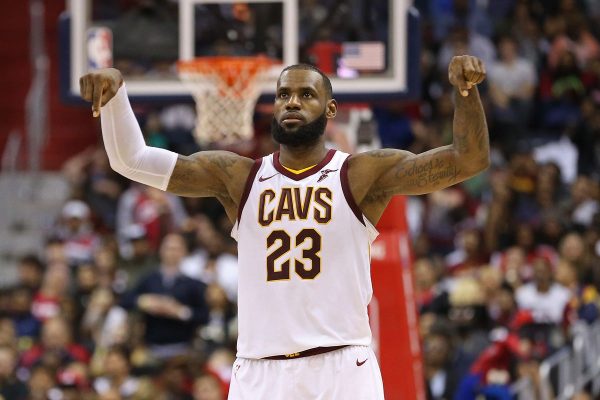 The clutch play of Cleveland Cavaliers forward LeBron James has been evident during the first month of the 2017-18 NBA season and has played a key role in forging the team’s current seven-game winning streak. The most recent evidence came on Wednesday night, when he knocked down 23 points during a fourth quarter that saw the Cavaliers complete a comeback against the Brooklyn Nets.

Of course, those that don’t take a closer look at the statistics involved might be inclined to discount James’ contributions during crunch time. Yet any arguments against his being the league’s most clutch player fall by the wayside when those numbers are presented and help offer ample proof of the 15-year veteran’s incredible value to the Cavs.

For starters, James not only leads the NBA in average points during the fourth quarter with 9.9, he also sits atop the list when it comes to clutch shooting percentage at 62.2 percent (23-for-37), one of three players to break the 60 percent threshold in this select category. Behind him are his former teammate Kyrie Irving at 61.5 percent (24-for-39) and Anthony Davis at 60.0 percent (9-for-15). Those in this ranking need at least 12 clutch shot attempts to qualify, with clutch being defined as shots taken with less than five minutes to go in the game and with a scoring margin of five points or less.

Some players veer away from the pressure of trying to deliver during the fourth quarter, content to let their teammates handle the burden. James has done anything but that by again leading the league when it comes to both field goals made and attempted during that final period. James leads both categories by a comfortable margin, drilling 3.8 field goals per game and averaging 6.7 shot attempts per game.

Even when James isn’t shooting the ball during crunch time, he’s having a huge impact on the Cavaliers’ fortunes. While he currently ranks second in fourth-quarter assists with 2.4 per game, he realistically should be considered the standard-bearer in that category as well. The reason stems from the simple fact that the players in first and third respectively (Chris Paul and Rajon Rondo) have each been limited to a handful of games — in contrast to James playing in all 17 of Cleveland’s contests so far.

In addition, James hasn’t neglected his defensive responsibilities during this crucial stretch, managing to place ninth in blocked shots per game during the fourth with 0.6.

What might be the most amazing statistic with respect to the 32-year-old James is that he’s been on the court for an average of 9.6 minutes per game during the fourth quarter this year. The nine players who have higher averages have an average age of 24, while the ten players just behind James average 25.2 years of age.

In short, the all-around presence of James after nearly 20 percent of the NBA regular season has been completed offers overwhelming evidence that those making the case for his clutch status are right on target. His leadership has been vital to getting the Cavaliers back on track after a bumpy start that saw many already deposing the team as the elite squad in the Eastern Conference.

That rough beginning was largely the byproduct of eight new faces on the team’s roster and the key injuries to players like Isaiah Thomas and Tristan Thompson that have prevented the Cavs from even scratching the surface of their potential for this season. Their return may help reduce the pressure on James to continue putting up such impressive numbers, though it’s readily apparent that he can do it whether they’re on the court or not this year.