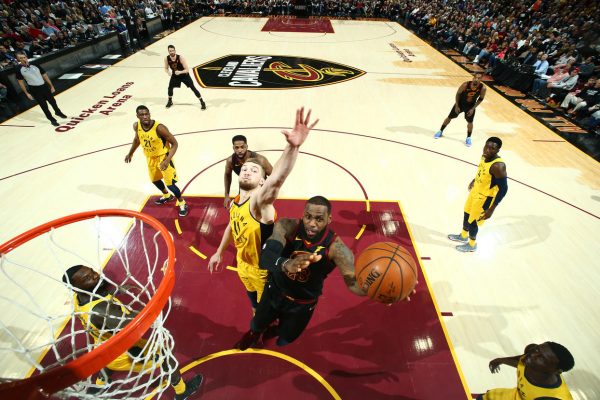 (Cleveland, OH) — LeBron James scored 45 points, including four in the final minute to help the Cleveland Cavaliers win Game 7 of their first-round series by defeating the Indiana Pacers by a score of 105-101 at Quicken Loans Arena on Sunday afternoon. The victory now sends the Cavs to a second-round series against the Toronto Raptors beginning on Tuesday night.

The Cavaliers were clinging to a slim two-point lead entering the final quarter and used the contributions of not only James, but those of Kevin Love and George Hill to cement the win. James scored seven of those 45 points in the last quarter, and also corralled nine rebounds and handed out seven assists for the game. Love had struggled for most of the series, but scored eight of his 14 points on the afternoon in that final period. Meanwhile, Hill, who had missed the previous three games before entering the game in the third quarter, offered strong defense and also managed to score 11 points and grab six rebounds, including nine points in the fourth.

James played 43 minutes in the contest and briefly left the game for treatment in the team locker room.

“Just had a little minor injury we had to take care of,” James said. “Any rest I was able to get benefited me and benefited the team.”

Love’s 3-pointer with 7:35 left made it a 91-79 game in favor of the Cavaliers, a cushion that allowed the Cavs to weather the inevitable push by the Pacers. That came in the closing minutes, with Cleveland hanging on to a 100-96 lead with 50.1 seconds left. However, a precise Kyle Korver pass to James resulted in a layup that effectively clinched the game with 30.2 seconds remaining. James and Hill then added the final three points at the foul line for the win.

“He (Love) struggled with his shooting, but all the players and coach believe in Kevin,” Cavs head coach Tyronn Lue said. “We just told him to take his shots. In that fourth quarter, he was huge for us.”

Lue indicated that Hill’s back problems were the basis for the veteran playing the remaining 19 minutes after he entered the game in the third quarter:

“He was playing well, but we didn’t want to have him rest and have the back stiffen,” Lue said.

Hill noted that he was ready to go if called upon:

“I must have gone through five ice packs,” Hill said. “I didn’t know if my number was going to be called, but Ty Lue said to be ready. I felt fine. I had rhythm going, got my motor going. It worked out great.”

Another key contributor in the game who had done little for most of the series was Tristan Thompson, who collected a double-double with 15 points and 10 rebounds.

“To have Tristan in there and seeing the energy he gave us, it was just something we hadn’t had all series,” Korver said.

“I said to Bron (James) after Game 6, ‘We’ve been through this before, so we have to come out ready to play,'” Thompson said. “You have to stay ready at all time. You just stay in rhythm because you never know. The playoffs are a long journey.”

The Cavaliers jumped out to a quick 9-2 lead and eventually built it into a double-digit advantage. Thompson immediately made his presence felt and finished the period with six points and seven rebounds. One key area that went in the right direction for the Cavaliers was in turnovers, where they were spotless in the opening 12 minutes compared to the Pacers’ four miscues.

Trailing by 11 at the break, the Pacers put together a strong third quarter to briefly take the lead with an 18-4 run to start the second half. The Cavaliers answered with an 11-4 run, but only held a two-point advantage at 76-74 by the end of the period. Unlike the first half, Cleveland was the victim of self-inflicted wounds by committing seven turnovers and struggling to even gets shots off, finishing just 5-of-12 from the field during the quarter.

“I told T. Lue that I plan on playing the whole game and let’s worry about the next round when we get there,” James said.

That next round gets underway on Tuesday night, with the Cavaliers facing a Raptors team on their home court for that game and Game 2 on Thursday night. Tuesday night’s opener will get underway just after 8 p.m. ET.