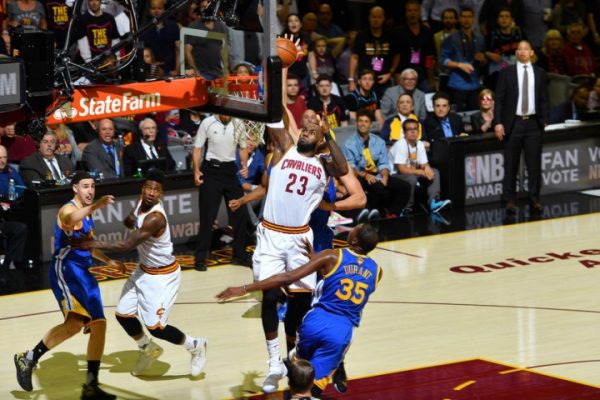 (Cleveland, OH) — The Cleveland Cavaliers watched a six-point lead disappear in the final three minutes, a slide that proved to be fatal as they dropped a 118-113 decision to the Golden State Warriors in Game 3 of the NBA Finals on Wednesday night at Quicken Loans Arena. The win now gives the Warriors a commanding 3-0 advantage in the series, with no NBA team ever having come back from such a deficit.

The Cavaliers had led 113-107 with 3:09 left after J.R. Smith‘s 3-pointer, then missed their final eight attempts from the field. That allowed the Warriors to score 11 unanswered points, with Kevin Durant‘s basket with 1:15 remaining making it a two-point game. Durant then connected on a 3-pointer with 45.3 seconds left to give them the lead for good.

“They made some shots and we didn’t,” LeBron James said. “We had a lot of really good looks. A lot of good looks.”

The defeat spoiled a pair of outstanding performances on offense by James and Kyrie Irving, who combined for 77 points on the night. James collected a double-double by finishing with 39 points, 11 rebounds and nine assists, while Irving tossed in 38 points, grabbed six rebounds and dished out three assists. The only other Cavs player to score in double figures was Smith, who contributed 16, while Kevin Love grabbed 13 rebounds and collected six steals despite a tough (1-of-9) shooting night.

“They executed down the stretch and they made big plays,” Love said.

Some postgame questions focused on the fact that James played 45 minutes and Irving 44. Both players rejected the idea that fatigue played a role in the struggles down the stretch:

“I was able to get second, third, fourth, fifth winds, so I don’t attribute fatigue to this defeat,” James said. “I gave everything I had tonight, so I can live with the results.”

“It’s the Finals and we had our horses in,” Irving said. “They’re a juggernaut team, so you have to give credit where credit is due.”

Clamping down on defense in the third quarter had helped Cleveland limit Golden State to 7-of-19 (37 percent) from the field while it was connecting on half of its 26 field-goal attempts. Trailing by one at 86-85 with 3:01 left in the period, the Cavaliers made their move by scoring nine of the next 10 points in less than two minutes to make it 94-87 in favor of the Cavaliers. Leading the push throughout the quarter was Irving, who scored 16 points during those 12 minutes.

“We just have to take it one quarter at a time and have to do a better job of taking care of the ball,” Smith said. “If we play like we did in the second half, we’ll be okay.”

Early on, another fast-paced first quarter saw both teams shoot 55 percent or better from the field, with the Warriors connecting on nine 3-pointers during the opening period. With two minutes left in the quarter, the Cavs had held a 32-29 lead, when James left the game for a few minutes of rest. That resulted in 10 unanswered points by the Warriors, giving them a 39-32 lead when the horn sounded.

As hot as each team was during the first 12 minutes, both went through a four-minute stretch in the second period where the only basket was a James layup. Continuing a frustrating pattern, the Cavs were unable to take the lead at any point in the quarter, falling behind by as many as eight before an Irving layup at the halftime buzzer made it 67-61 in favor of Golden State.

“We should have been more aggressive in the paint,” Cleveland head coach Tyronn Lue said. “If you miss shots and they’re able to get back in transition, you’re going to get hurt. I thought our team scrapped and competed, but they made the plays that they needed.”

James and Irving also supplied a vast majority of the Cavaliers’ first-half offense, accounting for 44 of the team’s 61 points. In addition, they combined for 18-of-27 (67 percent) from the field, with the other Cavs managing a weak 3-of-14 (21 percent) in that category. The Cavaliers defense also continued to have issues with the Warriors’ ball movement as the visitors collected assists on all but two of their 23 first-half field goals.

Irving was asked after the game about the rarity of the huge effort of James and himself still resulting in a loss:

The Cavs will attempt to avoid the sweep when Game 4 tips off just after 9 p.m. ET on Friday night. Meanwhile, the Warriors will not only seek to close out a championship, but also complete the postseason undefeated, which would be a first in NBA history.

“Obviously, it’s a dramatic situation, but it is what it is,” James said. “We just have to get ready for Game 4.”