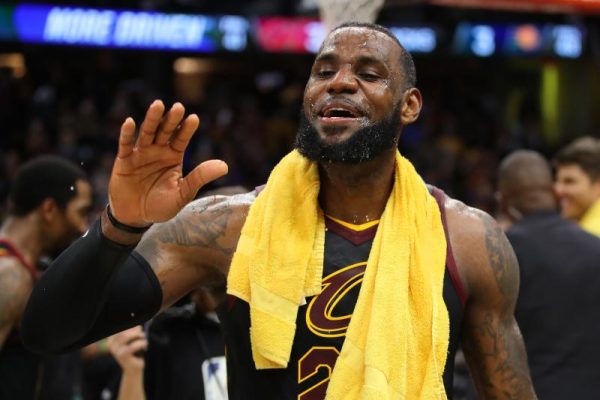 In one of the most thrilling games in the 2018 NBA playoffs, LeBron James capped off a 44-point performance with a game-winning 3-pointer at the buzzer. The 98-95 win gave the Cleveland Cavaliers a 3-2 series lead against the Indiana Pacers in the first round of the postseason.

After the game, James was interviewed by TNT sideline reporter Allie LaForce, who asked James what he told his teammates during the huddle prior to nailing the game-winner.

“Just trying to make these fans proud & make my teammates proud… I was able to make another play.”

–@KingJames on his game-winner #NBAPlayoffs pic.twitter.com/obunKBd9Vw

“Just give me the ball,” James replied. “They had a foul to give so I wanted to go quick so they couldn’t give up that foul because we had no more timeouts. I was able to turn and get to my spot. It’s like déjà vu from the regular-season game we had versus Minnesota where I got a block on the other end and then the game-winner. That team never stops and it’s gonna be even tougher on Friday.”

James has never shied away from the game’s biggest moments this season, leading the NBA in most points scored in the clutch with 197. His closest competitor, DeMar DeRozan, only scored 173 clutch points for the Toronto Raptors.

It was a magical night for James, whose teammates have been struggling to make shots all series long. Wednesday was no different, so the four-time Most Valuable Player had to take over the scoring chores once again. He had 44 points on 14-of-24 shooting and 15-of-15 from the line.

The win propelled the Cavs to their first series lead against the Pacers and they can close it out with a Game 6 win in Indiana on Friday.