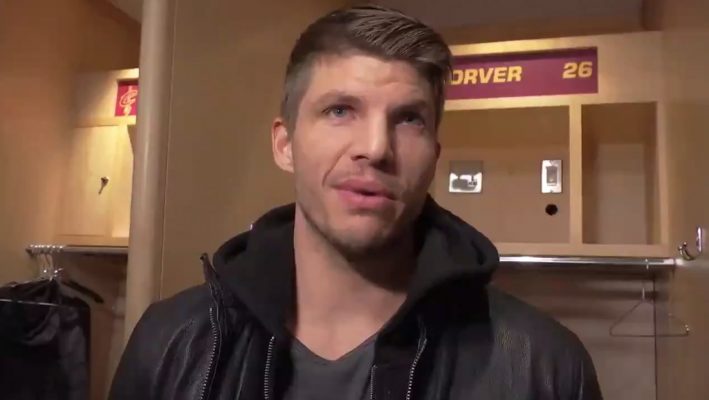 The Cleveland Cavaliers‘ Thursday night comeback was something to behold. The Cavs managed to overcome a 17-point fourth-quarter deficit  and proved once and for all that things are really starting to come together for a team that has struggled for much of the season.

Unsurprisingly, the comeback was fueled by a monster fourth-quarter performance by LeBron James. According to his longtime teammate Kyle Korver, anyone could have known the comeback was coming just by looking at James’ face.

Kyle Korver had an idea of the @cavs' comeback when he saw the look in LeBron James' face. #AllForOne pic.twitter.com/C69BInbDUH

“He gets that look,” Korver said following the game. “I thought when he kinda got hit in the face, in the tooth, it started for him. You kinda saw that look in his eye. He put his head down, put pressure on the basket, and when he does that he’s really hard to guard. We’re really hard to guard because of that.”

Hard to guard, indeed. In the final frame alone, James notched 13 points and four assists to help fuel the epic come from behind win. He finished the night with 33 points, 14 assists, and nine rebounds.

With the victory, the Cavs hold onto their half-game lead over the Philadelphia 76ers for third place in the Eastern Conference. On Friday night, the Cavs will face off against the 76ers in a pivotal game with huge playoff implications. Win or lose, Thursday night’s comeback proves that despite all the ups and downs of the 2017-18 campaign, James and the Cavs are very close to playoff-ready.