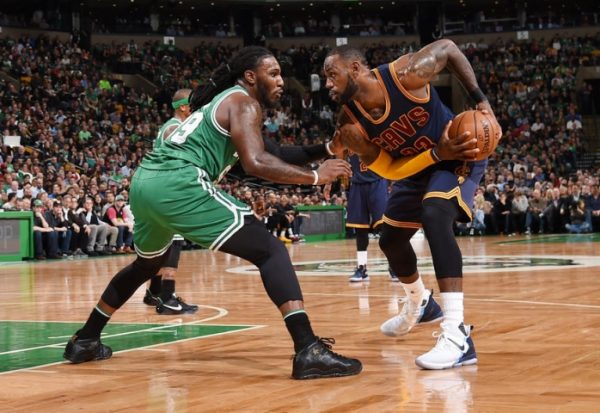 (Boston, MA) – Behind a 36-point effort by LeBron James, the Cleveland Cavaliers delivered a strong message to both their opponent and critics by putting together four quarters of strong play in a 114-91 rout of the Boston Celtics on Wednesday night at TD Garden.

The victory now gives Cleveland a one-game edge in the fight for the top record in the Eastern Conference, which would guarantee homecourt advantage for the first three rounds of the playoffs. The Cavaliers have four games left and would win the tiebreaker should the two teams end up with the same record.

James had only four points after one quarter, but erupted for 15 during the second quarter, when the Cavs grabbed hold of the game’s momentum and didn’t let go until the final buzzer sounded. In addition to his point production, James collected a double-double with 10 rebounds and also added six assists.

“He is who he is, taking his team and putting them on his back,” Cavaliers head coach Tyronn Lue said about James. “His will to win helped us.”

Kyrie Irving and the other three Cleveland starters each ended the evening by scoring in double figures. Irving scored 19 and dished out five assists, while Kevin Love joined the double-double category by scoring 15 and grabbing 16 boards. J.R. Smith added 12, while Channing Frye added 10 in his start at center.

“We’re just continuing to play at a high level. We’re getting in better shape, demanding more out of ourselves and we’re putting a great product out here,” Irving said. “A lot of film session and guys just digging down deep and understanding what we’re gearing up for. We’re still shaping and molding ourselves, but this was a great step in the right direction.”

The Cavaliers combined solid defense with strong rebounding throughout the game. In the latter case, their 51-38 advantage was ironic considering the Cavs accomplished the victory despite missing their top rebounder, center Tristan Thompson, who saw his 447-consecutive-game streak come to an end due to an injured thumb.

Despite shooting just 26 percent from the field during the first quarter, the Cavaliers only trailed 20-19 when the period ended. The key reason was that the Celtics were also struggling with their shooting and the Cavs held a 19-11 edge on the boards, including 8-3 on the offensive glass.

Cleveland began the second quarter on fire by hitting 10 of its first 13 shots to fuel a 22-4 run that gave it a 41-24 lead. Boston did briefly get the game under double-digits, but by halftime, the Cavs had pushed their lead back up to 15 at 57-42.

“We play best when we’re talking and communicating and we did that tonight,” Smith said. “Thankfully, we made some shots early and took their crowd out of it.”

Any thoughts of a Boston comeback quickly faded after the break as Cleveland boosted the lead to as many as 29 points during the third quarter. One of the reasons for that surge was that what had been frigid shooting from long-range warmed up during the period. The Cavs hit from deep five times, compared to four for the entire first half.

“We followed the game plan and did good job,” Lue said. “We wanted to start off the game with a defensive mindset, so we put together some schemes and it worked.”

The Cavaliers will now face the Atlanta Hawks in consecutive contests, beginning with Friday night’s home matchup at Quicken Loans Arena that will tip off shortly after 7:30 p.m. ET. That will be followed by a Sunday afternoon clash in Atlanta that will get underway shortly after 3:30 p.m.