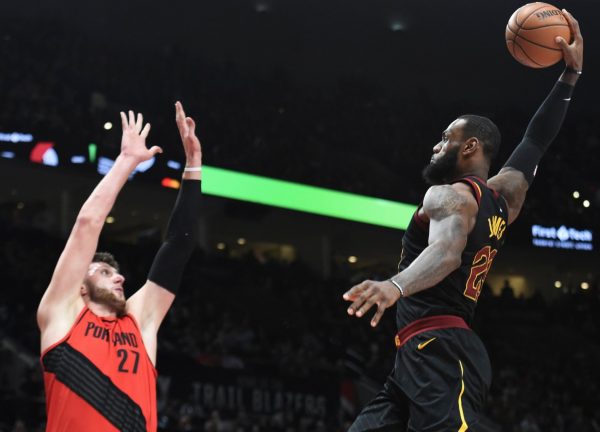 Social media was ablaze after one of the most explosive plays of the season from arguably the NBA’s best player in the game today. No one saw it coming, especially Jusuf Nurkic, who was only trying to play good, hard-nosed defense.

In the first quarter of the game between the Cleveland Cavaliers and Portland Trail Blazers, LeBron James had his rocket thrusters push him full speed ahead to the hoop. Rather than lay the ball up, James went high for a vicious one-handed tomahawk jam right in the face of the 7-foot Nurkic.

James surprised even his own teammates who are supposed to be used to plays like these from the Chosen One. But this one was extra special. Cavaliers guard Jordan Clarkson had one of the best responses to James’ disrespectful slam over Nurkic.

Jordan Clarkson on LeBron's dunk over Nurkic: "I think there's a body bag in the hallway."

After the play, the crowd went berserk even though James and the Cavs were the visiting team. The arena was still buzzing long after the play was over as the stunned crowd couldn’t believe what they had just witnessed.

“I knew it was going to be a good one that’s going to be shown for a long time,” James said afterward. “I was more excited to look over and see how excited (my teammates) were. That one will last forever.”

The Cavaliers may have lost to the streaking Blazers 113-105, but the four-time MVP will have at least one good memory from this trip.