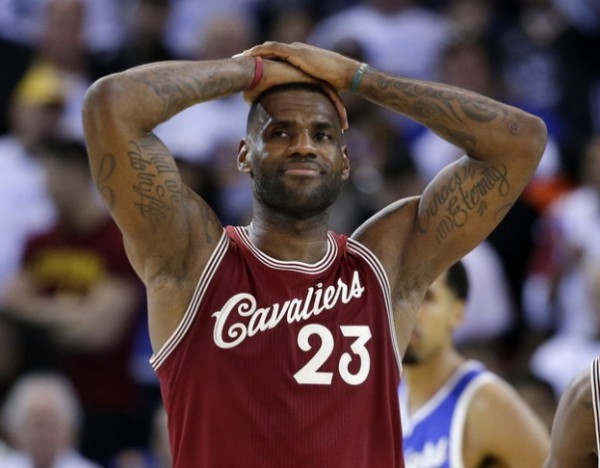 The stagnant offense of the Cleveland Cavaliers over the past three games has been primarily attributed to the problems of trying to integrate the return of both point guard Kyrie Irving and his backcourt mate Iman Shumpert. The specific term to detail the problem by LeBron James was “rhythm,” which he’s used to describe the team’s two road losses in recent days.

Even without any terminology, the statistics clearly tell the story of a team that’s currently struggling on offense, which the Cleveland Plain Dealer’s Joe Vardon pointed out in an article looking at the issue.

When Irving returned last Sunday, it was against a bad Philadelphia 76ers squad, so any flaws went undetected in the rout. However, three nights later, the team needed shutdown defense in the final minutes to defeat a New York Knicks team that was without their best player, forward Carmelo Anthony. In the latter contest, the Cavaliers managed just 91 points.

On Christmas Day, the opportunity to defeat the defending NBA champion Warriors on their home court disappeared, in part, because of the team’s 32 percent field goal shooting. Then, on Saturday night, the flat Cavs were never in the game, shooting just 36 percent in a 105-76 pounding by the Portland Trail Blazers.

Those rhythm problems have resulted in James shooting just 36 percent over the past two contests, including scoring just a meager 12 points against Portland.

Going a little deeper into the subject, James hinted at head coach David Blatt’s substitution patterns being an issue:

Despite the discouraging stretch, James knows it’s far too early for any discouragement to seep into the team’s mindset:

“The only thing that is gonna help it is practice and games,” said James. “This is, what, game three since everyone has been back? It’s not looked very well so far.”

The Cavaliers have an opportunity to get back on track Monday night against a depleted Phoenix Suns squad that won’t have two key performers: Markieff Morris due to suspension and Eric Bledsoe due to injury.