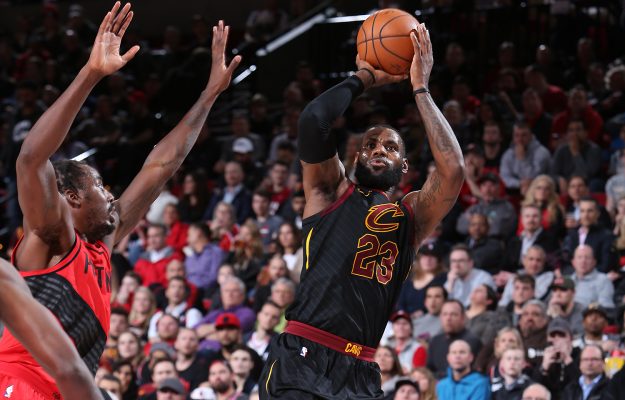 (Portland, OR) — Despite a fourth-quarter rally that made it a one-possession game with less than three minutes left, the Cleveland Cavaliers came up short, losing 113-105 to the Portland Trail Blazers at Moda Center on Thursday night. The loss was the Cavs’ third in their last four contests, while the Trail Blazers extended their winning streak to 11 games.

With just under five minutes left in the game, the Cavaliers trailed 105-93, but used a 9-2 run to slice the margin to just three with 2:58 to play. George Hill connected from long-range to close that surge, but that would be as close as the Cavs would get for the remainder of the contest.

“We just couldn’t get stops down the stretch when we needed them,” Cleveland head coach Tyronn Lue said after the game.

Throughout the game, the Cavaliers had few answers to combat the Trail Blazers’ smooth ball movement that saw them dish out 26 assists. In addition, the short-handed Cavs were drilled on the boards, especially on the offensive side, with the Blazers holding a 50-37 edge overall and 13-2 on offense.

“We did some good things defensively with our blitzes, but 13 offensive rebounds hurt us,” Lue said.

That supremacy on the offensive glass allowed Portland to score 20 second-chance points, compared to just four for Cleveland, which also delivered some self-inflicted wounds by missing nine of its 21 free-throw attempts.

“I thought our approach from beginning to end was good,” LeBron James said. “But you can’t give them 20 second-chance points. They can make you pay and they did.”

James led all scorers, collecting another double-double with 35 points and 14 rebounds, while also adding six assists. Kyle Korver tossed in 19 points, with Jeff Green adding 16 and Jordan Clarkson contributing 14 on the night.

In the first quarter James also delivered a monster dunk that caused the Cavaliers bench to erupt, with the veteran aware of the basket’s impact even before he scored.

“I knew it was gonna be a good one,” James said. “That’s gonna be a highlight at the end of my career.”

The dunk also left a distinct impression on Clarkson.

“There’s a body bag in the hallway,” Clarkson said. “That was one of the best dunks I’ve ever seen. It was crazy.”

Rodney Hood returned to the starting lineup, though Lue indicated after the game that the guard left the game after 18 minutes of action because he had tweaked his previously injured back. The short-handed Cavs were also without the services of Larry Nance Jr., who sat out the game with a hamstring injury. To replace Nance, Green got the start at center, which resulted in the 20th different starting lineup for Cleveland this season.

“We had a chance to win the game, but small mistakes, that’s what it came down to,” Clarkson said.

The Cavaliers’ lengthy six-game road trip comes to an end on Saturday night when they face the Chicago Bulls. Tipoff for that clash will be just after 8 p.m. ET.