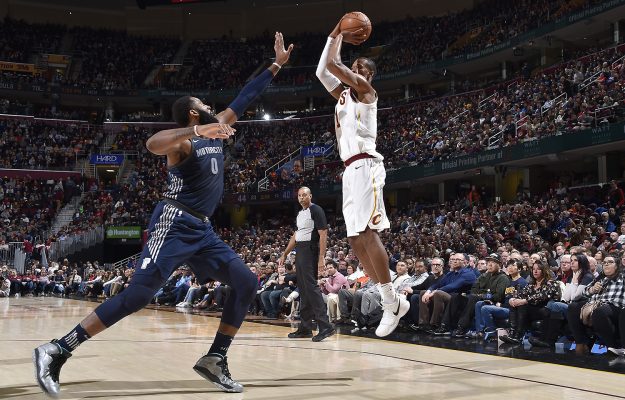 Prior to the game between the Cleveland Cavaliers and Detroit Pistons, Cavs head coach Tyronn Lue addressed questions about the team’s starting lineup. Tristan Thompson is currently dealing with an ankle injury, which forced Lue to tweak his starting lineup one more time as the center is expected to be out for several games.

Lue revealed that his starters for the Pistons game would be George Hill, J.R. Smith, Rodney Hood, LeBron James and Larry Nance Jr.

Hood replaced Cedi Osman who has been the Cavs’ starting small forward since the trade deadline deals were consummated, while Nance took charge of the center responsibilities that Thompson left.

Somewhat perplexed by the decision to start Hood at small forward, a reporter inquired about Lue’s sudden move to bring Osman off the bench this time.

“Just because Nance is starting and he’s been our boost off the bench defensively and his energy,” Lue explained. “I just think now we need someone like Cedi to come off the bench and give us that same boost and the same energy defensive-wise.”

Asked if he was going to try this lineup for “a while,” Lue simply nodded and said, “Yeah.”

In the first game with this new lineup, the Cavaliers routed the Pistons 112-90 as Nance had 22 points and 15 rebounds while Hood contributed 13 points. James, meanwhile, was his usual spectacular self, scoring 31 points, grabbing seven rebounds, and dishing out seven assists in just 29 minutes of playing time.

Expect the Cavs to stick to this lineup for the time being until Thompson and Kevin Love return to the team. Both are expected to be back before April.