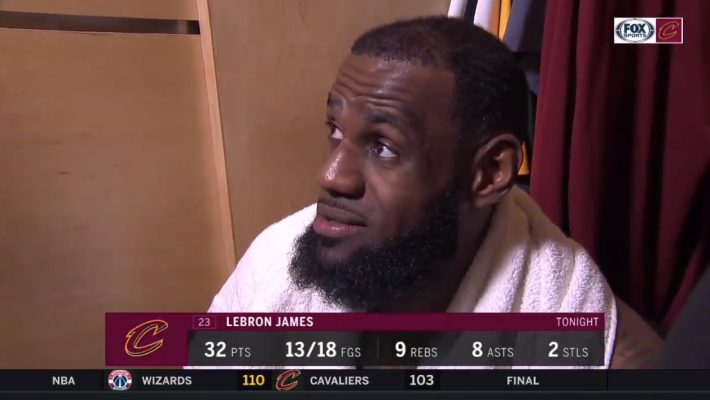 The Cleveland Cavaliers were back in action for the first time since the All-Star break against the Washington Wizards on Thursday night. In what was a highly anticipated ball game by Cleveland fans, the Cavs, unfortunately, lost to the Wizards, 110-103.

It was the first time fans at Quicken Loans Arena got to watch the four new players brought in by general manager Koby Altman.

In an interview posted by Fox Sports Ohio after the game, LeBron James explained that he understands that the losses would come with the team bringing in so many new pieces to the roster.

LeBron James puts tonight's loss and the addition of four new players into perspective "It's not going to be overnight…we have a lot of things to work on." #AllForOne pic.twitter.com/IKrS3S9bSM

“We got some really, really good looks,” James said. “We played hard. I think the legs, being off for nine days, kinda got to us especially after the first quarter. Shots that we are accustomed to making, even great ball movement, just weren’t going down. We had some wide-open looks where guys weren’t even contesting. And I give a lot of credit to [the Wizards], they’ve been playing really good ball as well. Like what I told you guys, it’s still a work in progress for us. It’s not going to be overnight, no matter the excitement before the break. We’ve got things to work on, implement what we need to do but tonight we still played to our game we just didn’t make a lot of shots.”

The loss was the first in the last five games for the Cavaliers, who were on a four-game winning streak. The string of wins began with the drama-filled 140-138 overtime victory by the Wine and Gold on a game-winning shot by James. After another win versus the Atlanta Hawks, the Cavaliers reeled of two straight victories against the Boston Celtics and Oklahoma City Thunder.

Both of those wins were convincing victories against two of the league’s best and it showcased the Cavs’ potential with George Hill, Jordan Clarkson, Rodney Hood, and Larry Nance Jr.

Against the Wizards, however, they couldn’t make many of their shots and none of them were in double figures by the end of the game.

The Cavaliers will now be traveling to face the Memphis Grizzlies on the second night of a back-to-back.