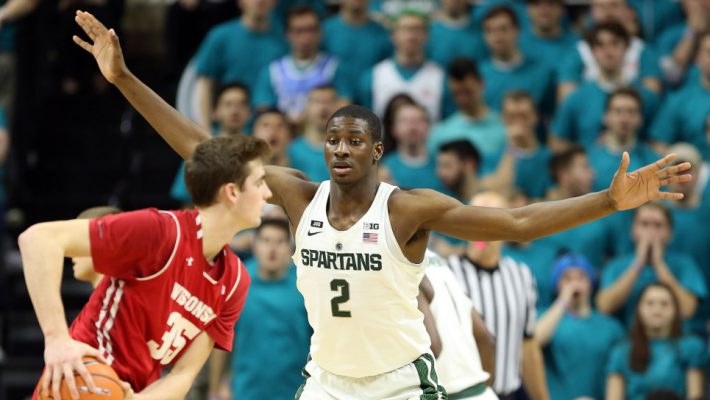 The Cleveland Cavaliers made it very clear that they were willing to part ways with a plethora of pieces prior the NBA trade deadline. They also made it clear that the Brooklyn Nets’ 2018 first-round draft pick that they acquired in the Kyrie Irving trade was wholly off limits.

Now, fans are finally gaining a bit of insight into what kind of talent they can expect from that highly coveted pick.

On Tuesday, ESPN’s Jonathan Givony broke down where and who the Cavs might pick in the 2018 NBA Draft on June 21. According to Givony, the Cavs are likely to land the No. 4 spot and select Michigan State University standout Jaren Jackson Jr.

A look at where the top prospects might land: pic.twitter.com/oCeKurPTT4

“At 6-foot-11 and 242 pounds, with a 7-foot-4 wingspan, it’s very likely that Jackson will see significant minutes at center in the NBA as his promising frame fills out, rather than at the 4, as he mostly does in college at the moment,” Givony wrote. “Jackson’s ability to space the floor (44 percent from 3; 79 percent from the line), block shots (5.9 per 40 minutes), switch on every screen and, increasingly, put the ball on the floor from the perimeter make him an ideal fit for the modern NBA.

“He has significant upside to grow into as well, as he’s the youngest player currently projected to be drafted. Jackson is the exact type of player the Cavs sorely need on their roster right now, but he’d be a terrific building block to have regardless of what LeBron James decides to do.”

So far this season, Jackson is averaging 11.6 points, 5.9 rebounds, and 3.3 blocks per game for the 26-3 Spartans. While his numbers don’t necessarily jump off the page, his upside does.

Jackson could serve as the athletic big man that possesses the ability to score from all over the court that all NBA teams covet and few are lucky enough to possess. His huge wingspan and shot-blocking ability would also help shore up a Cavs defense that has struggled mightily this season.

The expectations going into next season will be largely dictated by where James ultimately decides to sign. If he does end up choosing to remain in the Wine and Gold, a player like Jackson could make the Cavs even more dangerous. Regardless of what happens with James this offseason, it is clear that the Cavs made the right move in terms of holding onto their pick. The upcoming draft class is expected to be loaded with talented players at the top, and barring a catastrophic lottery, the Cavs should have the opportunity to draft one of them.