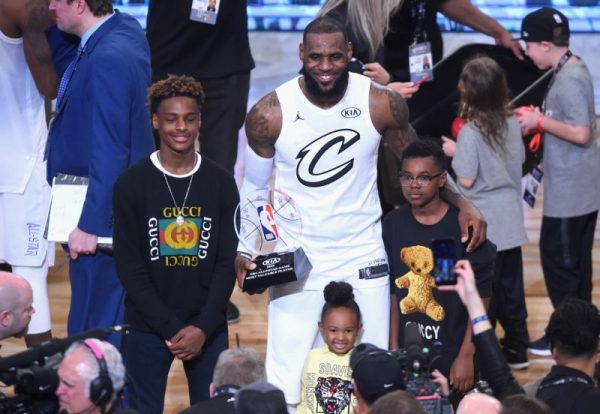 The two teams that have been given the best chance of signing soon-to-be free agent LeBron James are his current team, the Cleveland Cavaliers, and the Los Angeles Lakers. Those concerned about the chances of the Lakers signing him are likely taking note of one report that James’ oldest son is expected to go to school in Los Angeles.

“As one source with knowledge of the situation put it … all signs point to Bronny ending up at SC, and the school is holding a place for him when he makes his final decision.”

James Jr. is only 13 years old, but is already considered to be following in the footsteps of his legendary father. For his age, he’s considered to be among the best basketball players in the country.

If James Jr. attends that school, he would be joining the school’s basketball team that currently has the sons of former NBA stars Scottie Pippen and Kenyon Martin. The school is also where Marvin Bagley Jr. played before attending Duke University for one year. Last week, Bagley was the second overall pick in the NBA draft.

Los Angeles has been one of the favorites to sign James because of the fact that James already owns two mansions in the area and the Lakers have enough salary-cap space to sign two major free agents.

Of course, James was rumored to be looking at schools in other potential cities where he might possibly play. Even the fact that someone is registered doesn’t necessarily guarantee that they’ll attend, with the Los Angeles-based TMZ likely offering hype to its home market.