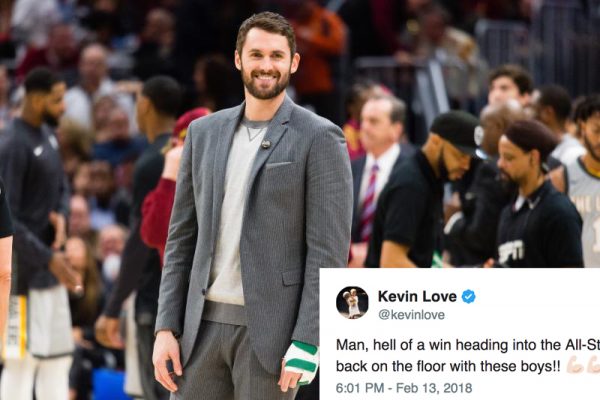 The immediate aftermath of the Cleveland Cavaliers‘ 120-112 road victory over the Oklahoma City Thunder brought with it excited reactions from the team and its fans. One of those team members was Kevin Love, who’s currently rehabilitating a broken left hand suffered during a Jan. 30 loss at Detroit. He took to social media to offer his thoughts on the team’s fourth consecutive win.

Man, hell of a win heading into the All-Star break!! Can’t wait to be back on the floor with these boys!! ????

Love is obviously chomping at the bit to return to action and is focused on beating the original medical diagnosis that indicated he’d be out between six to eight weeks. He’s resuming his cardio work and is reportedly two weeks away from having his cast removed.

When Love does make it back to the court, it will further bolster a team that’s undergone a remarkable transformation in the span of just a week. On Feb. 6, the Cavaliers suffered another second-half collapse, this one against a struggling Orlando Magic team, but managed to win on a buzzer-beater by LeBron James the following night. Since then, four new players were added and three more victories have followed.

While the Cavaliers likely welcome the rest they now receive from the All-Star break, it will briefly dull the momentum of their new outlook. They resume play on Feb. 22 with a home game against the Washington Wizards.