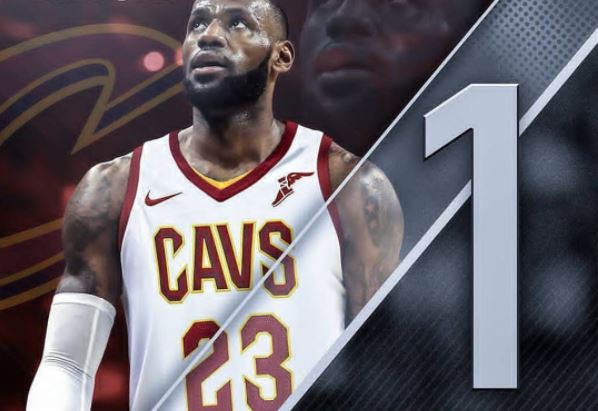 For the fifth straight year, dating back to 2012, Cleveland Cavaliers superstar LeBron James is far and away the best player in the NBA, according to Sports Illustrated‘s annual top 100 rankings.

The list was compiled by Ben Golliver and Rob Mahoney. Golliver had this to say about James in coming up with his ranking:

“Slowly but surely, some minor cracks have developed in James’s seemingly impenetrable reputation as the NBA’s best player. He hasn’t won MVP honors or led the league in PER or Win Shares since 2013. He hasn’t earned an All-Defensive selection since 2014. He hasn’t captained the league’s top offense or played for the league’s winningest team since 2013. He “only” finished fourth in 2017 MVP voting, second in the league’s most recent ranking of jersey sales, and third in 2016 All-Star fan votes.

“But James (26.4 PPG, 8.6 RPG, 8.7 APG) maintains the No. 1 spot on this list for the fifth straight year because he continues to consistently reach heights that no other current player—and virtually no other player from any era—can touch. Even after 14 seasons and 12 playoff runs, his peak play tops any of his contemporaries’ peaks, and he’s proven in each of the past three years that he can sustain that transcendent level of dominance throughout an entire postseason run and against superior opponents whose game plans are specifically geared toward exhausting him.

“The only player in NBA history to match James’s 2017 postseason stats—32.8 PPG, 9.1 RPG, 7.8 APG—across multiple playoff rounds was James himself in 2009. The only player in NBA Finals history to match James’s triple-double stats against Golden State—33.6 PPG, 12 RPG, 10 APG—was no one. He routinely threw together jaw-dropping performances, complete with beautiful spin moves, laser passes and chase-down blocks, against the Warriors’ armada of skilled defenders. Underline that point twice in red ink: James’s unprecedented individual playoff heroics came against a juggernaut that deserves a place in the Greatest Team of All-Time conversation. His feats would be worthy of gushing if they came against an average Finals opponent, and they deserve to be amplified given Golden State’s obscene degree of difficulty.

“Make no mistake, James’s regular season was great too. He averaged better than 25/5/5 for the 13th (!) straight season, he led the league in Real Plus-Minus and minutes per game, he captained the most efficient offense of his career, he averaged career-highs in rebounding and assists, and he rediscovered his confidence in his three-point shot. Along the way, he became the only person to stave off aging more effectively than Halle Berry.”

Behind James in SI’s rankings were Kevin Durant at No. 2, Stephen Curry at No. 3, and Kawhi Leonard at No. 4. With no Kyrie Irving at his side, look for James to elevate his game to another level this upcoming 2017-18 campaign and make a push for his fifth MVP and possibly fourth NBA championship.