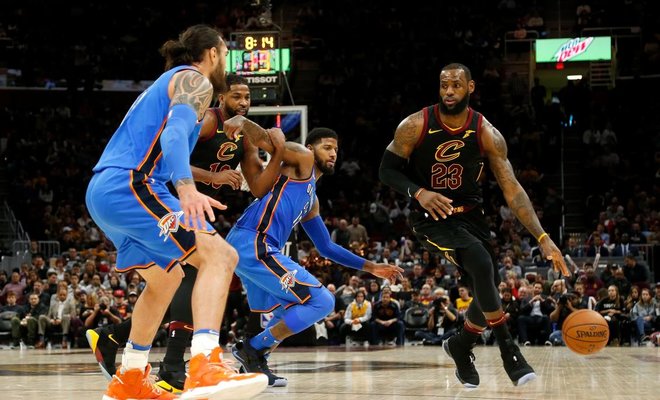 For the first time in a long while, Cleveland has found a starting lineup that works. So, when the Cleveland Cavaliers visit the Oklahoma City Thunder on Tuesday, expect to see more of the same.

According to Cavs head coach Tyronn Lue, the Cavaliers will employ the same starting lineup they used against the Boston Celtics.

In other words, the Cavs will be starting George Hill at point guard, J.R. Smith at shooting guard, Cedi Osman at small forward, LeBron James at power forward, and Tristan Thompson at center.

Osman will be starting for the third straight game, giving the first unit a much-needed energizer right out of the gates. It has worked the past few games with Osman recording career-highs in just about every category and the team is benefitting from the extra minutes he’s been receiving.

“I mean, I like what he brings,” Lue said in an interview according to Joe Vardon of Cleveland.com. “I think having Bron at the four…it’s a big disadvantage (for opponents) having him at the four, because now you’ve got four guys that push it out on the break. I think that’s big.”

The Cavs are much better with Osman playing more minutes and he has produced the numbers to justify his inclusion as a starter. In those two games, the Turkish forward is averaging 14.0 points, 5.5 rebounds, 3.0 assists, and 2.0 steals. It’s a small sample size but as long as it works, Lue isn’t about to do anything to disrupt a working system.

In their last meeting, the Thunder destroyed the Cavaliers 148-124 on their own home floor. The Cavs are looking for revenge with new weapons to employ against one of the West’s best teams.

After checking Kyrie Irving last Sunday, Osman has his hands full once again with Russell Westbrook. He’s the Cavs’ energizer bunny and he’s about to face someone who’s got the engine to match him.

“Russ is just very good, a lot of energy. So it’s going to be another big challenge for me.”

The Cavs’ three-game winning streak is at stake when this starting lineup takes the floor Tuesday.