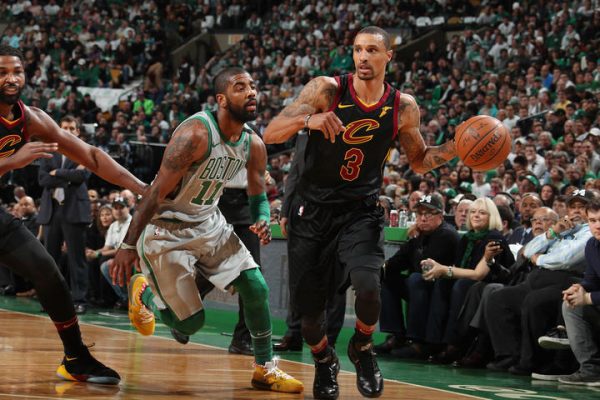 The pounding the Cleveland Cavaliers delivered the Boston Celtics on Sunday seemingly came out of nowhere, especially since it came on the same day that the Cavaliers inserted four new players into their lineup. However, one of those new players, guard George Hill, explained after the game why the Cavaliers offer a promising new look, with those players combining for 49 points in the win.

George Hill on the Cavs looking far different than before: "I’m a big believer that if you continue to look back at your past, you’ll trip over the future that’s ahead of you. I don’t care what happened before. We’re here to start something new.”

That past, which included blowout losses and often-listless play, was likely quickly forgotten when the Cavaliers engineered two of their deals on Thursday. Those four new players, coupled with the departure of six players from what had become a struggling unit, helped establish a new team identity that offered positive early signs in the group’s first game.

Hill and Rodney Hood were part of a three-team deal that involved the Sacramento Kings and Utah Jazz, while the duo of Jordan Clarkson and Larry Nance Jr. arrived from the Los Angeles Lakers.

The challenge continues on Tuesday night when the Cavaliers travel to face the Oklahoma City Thunder. That will be the final game before the All-Star break, allowing the four new players to catch a breather before they resume play for what the Cavs hope will be another trip to the NBA Finals.